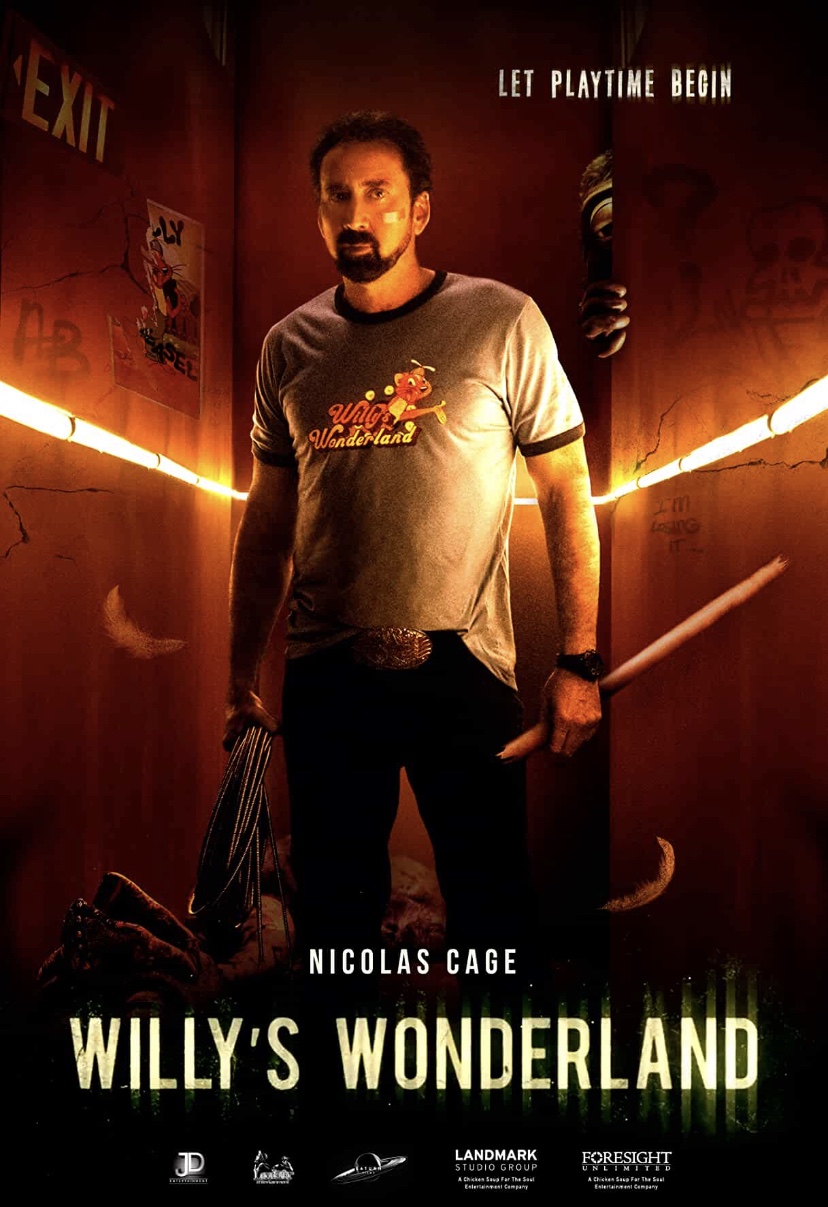 Willy’s Wonderland could be seen as the final chapter in what I’ll affectionately refer to as Nic Cage’s “Bonkers Trilogy,” the other two films being Mandy and Color Out of Space. Of course, a lot of movies he’s done over the past 10 years could be considered bonkers, if only because Mr. Cage appears unable to say no anymore (surely he’s paid off all those back-taxes by now).

But the premise is not what puts Willy’s Wonderland in the upper echelon of batshit b-movies. It’s Cage himself. Like a selfless soldier diving on a live grenade, it’s his gonzo performance that ultimately saves the film from utter mediocrity. Unlike, say, Bruce Willis, we’re never under the impression Cage is giving less than his all.

Blatantly capitalizing on the popularity of the Five Nights at Freddy’s video game – itself a thinly-disguised riff on Chuck E. Cheese – the film features Cage as an unnamed motorist who’s stranded in a small town because he can’t afford to repair his car. However, the owner of Willy’s Wonderland, a family party place that’s been closed down for a few years, offers to pay for repairs if the man agrees to spend the night cleaning the place up so it can re-open. Meanwhile, angry teenager Liv Hawthorne (Emily Tosta) is hell-bent on burning the place down with the help of some friends.

Willy’s Wonderland has a dark past, of course, which is explained in (too much?) detail by various secondary characters. But the driver learns almost immediately that the place is evil when the animatronics come to life and start attacking him. Fueled by caffeine and badass fighting skills, he’s more than ready to take them on. In fact, part of what I find pretty damn funny is that he never appears even remotely shocked over his situation, as if machines turn homicidal every day of the week.

When Cage is on-screen committing mechanical mayhem, the movie’s a real hoot. He remains silent throughout the whole film, chugs sodas on the hour, repeatedly turns his head to glare (in slow motion) and does the wildest pinball dance you’ll ever see. He also appears unconcerned with these teenagers’ safety when they start getting picked-off one by one. Neither will you, actually. It’s the usual batch: the stoner, the dork, the sexpot, the horndog and, of course, the final girl. They’re so generic that our interest level drops to near-zero whenever the narrative focuses only on them.

Some of the restaurant’s backstory is kind of interesting, though not entirely necessary. There are moments that tend to over-explain things, throwing-in serial killers, satanic pacts and the town’s dark past. It might have been more effective – and a little creepier – if no reason was given. Still, Willy’s Wonderland is worth checking-out for another bout of Nicolas Cage craziness, owning the entire movie without uttering a single word. It makes a fitting conclusion to his “Bonkers Trilogy,” though none of us really think it’s gonna end here, do we?