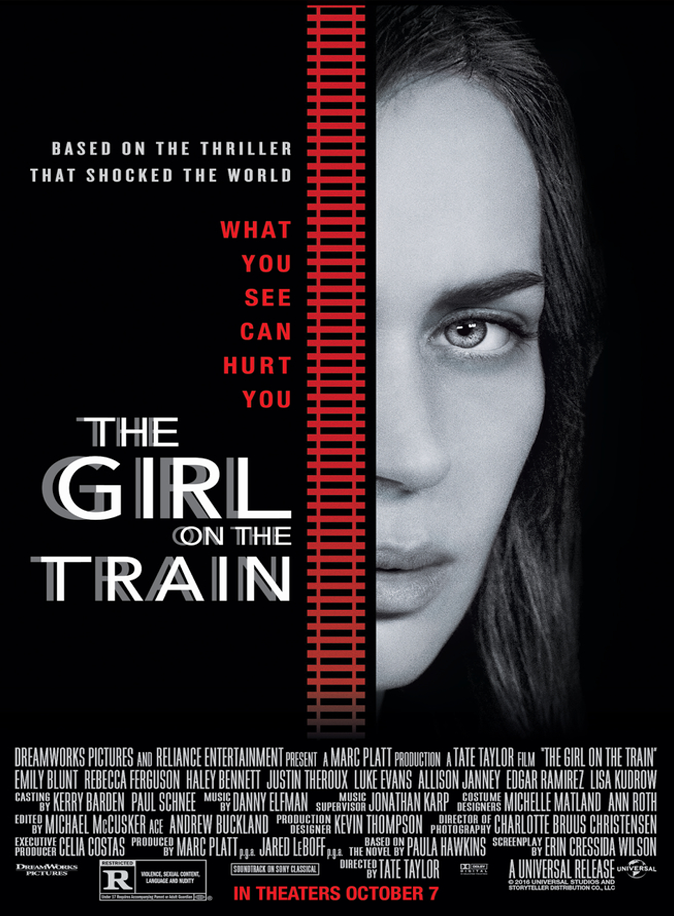 As paranoid as a curving bullet made of steel-melting jet fuel fired by a lizard-person.
Rachel Watson (Blunt) is a drunk who is prone to blackouts and fits of rage which effectively ended her marriage to Tom (Theroux). Even though Tom was caught cheating on Rachel with their real estate agent Anna (Ferguson), he’s portrayed sympathetically as he’s seen to be the one who’s often been at the wrong end of Rachel’s abuse and constant embarrassing behaviour, most notably when she caused a scene at an office party which lead to him being fired by his boss (Lisa Kudrow).

Now divorced from Tom, Rachel spends her time stalking and harassing her ex and Anna, who is now married to. Rachel is also living with her friend Cathy (Laura Prepon) but lies about having the job she was fired from. To conceal how bad things are for the depressed alcoholic Rachel, she spends her days travelling to the city by train so her friend won’t find out the truth. During these daily journeys Rachel is almost always drunk, which has become apparent to some of her fellow commuters.

The train journey she takes every day passes directly by her old house, now inhabited by Tom, Anna and their beautiful daughter. But, as is the case with a lot of addicts, Rachel develops new obsessions. Her latest fixation is Tom and Anna’s neighbours, Megan and Scott Hipwell (Haley Bennett and Luke Evans, respectively). Rachel idealises Megan and Scott’s relationship, imagining them as the perfect couple. Of course, all of this is based on fleeting glimpses of their lives as she whizzes past on the train through a haze of vodka.

When Rachel spots Megan, whom she has never actually met, kissing another man she drunkenly departs the train, distraught at the thought of Megan ruining this rosé wine-tinted fantasy she’s concocted to confront her. Unfortunately, that’s the last thing Rachel remembers as she awakes in her apartment from a blackout.

When Megan is reported missing and presumed dead Detective Riley (Allison Janney) questions Rachel, believing her to be involved somehow, due to reports of her unpredictable behaviour. This is where Rachel really goes off the deep end. Posing as Megan’s friend, she approaches Scott and informs him of the affair. Scott identifies the other man as Megan’s therapist, Dr. Kamal Abdic. She then makes an appointment with Kamal, pretending to seek therapy. The irony is not at all subtle here.

It’s apparent that Rachel, like almost all addicts, can’t fully trust that even a broken clock is right twice a day. She goes from one erratic theory to another, pointing fingers in an attempt to solve the disappearance of Megan and finally have some closure to why, from her point of view, this perfectly happy young woman’s life was thrown or taken away. Rachel sees herself in Megan, but doesn’t want to let anything happen to ruin the latter’s life the way it did her own.

The truth is that Megan and Scott’s marriage is far from happy. Scott is jealous and controlling and has quite the temper. Megan is depressed and going through the motions. Kamal’s career would be at risk if rumours were to spread of him having an affair with a patient. And Rachel herself is erratic, has a history of violent outbursts and can’t seem to trust her own judgment.

The Girl on the Train is icy cold and fraught with peril. There’s an uneasy, almost sickly, tone pulsating throughout the film. Blunt is superb as the spiraling drunk. She plays Rachel with such empathy and sadness it’s hard not to root for her. Rachel is complex and that’s, in no small way, down to Emily Blunt’s performance. It’s hard to hate her but she’s also difficult to like.

Bennett’s performance as Megan is tragic. She’s icy cold and with good reason. Her early life, in a series of flashbacks, will break the hardest of hearts.