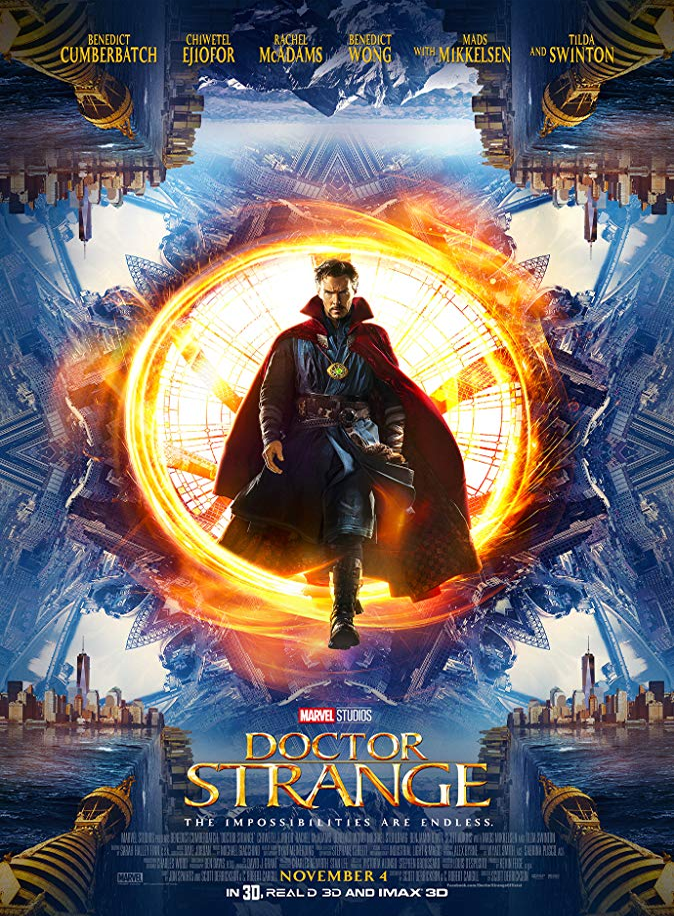 Marvel’s Doctor Strange (Benedict Cumberbatch) is an interesting and intriguing take on the world of illusion within film. We are introduced to Stephen Strange who is a world class neurosurgeon who also is cocky and has a huge ego. He berates his colleagues and goes out to embarrass them just to make himself look better. Whilst driving to a Medical Dinner to make a speech he loses control of his sports car and skids off the road narrowly escaping death. Strange wakes up from surgery with metal pins all over his hands and realises that his days as a top surgeon are numbered unless he can find a way or method to operate on his hands to put them back to the way they were. Sounds easy right?

Without giving away too much, Benedict Cumberbatch (Star Trek Into Darkness) just nails the character from the very beginning. He rocks as Strange and pulls it off with ease. The impressions his portrayal gives us is that he was born to play the role of the ex-neurosurgeon turned Doctor Strange the Sorcerer. Such is the talent of the lead cast, that it represents just how good the movie was overall. Whenever Strange gets a bit cocky, you can see hints  of Cumberbatch’s Sherlock character sliding in there and Cumberbatch’s sense of humour is suited to the character as the egocentric yet sharp witty guy.

Desperately searching for a way to fix what had happened to him, he is told about a paralysed man who goes by the name of Jonathan Pangborn (Benjamin Bratt) walking perfectly again. Strange at first doesn’t believe this to be possible but after seeing the man in person on a basketball court. Doctor Strange seeks the truth into how this can be happening. Pangborn lets Strange know of an ancient treatment in Nepal only to be drawn into a world of mystic arts.

We are introduced to Mordo played by Chiwetel Ejiofor (12 Years a Slave) who like Morpheus in the Matrix once said “you have to unlearn, what you have learnt”. (Chiwetel Ejiofor (12 Years a Slave) turned in his usual solid work as Mordo, someone who starts out on the right side but turns out to be just too rigid for his own good.) This is true in Strange’s case as his medical background always had him belief that the life’s of so many where in his hands and as the ‘Ancient One’ says in Doctor Strange, “You have been looking through a keyhole to life” and it is true about Strange’s blinkered egotistical view on his life and all the others on his life.

Strange, Mordo and The Ancient One’s first meeting is awkward for the characters as they don’t believe that Strange is capable at first to open his mind, but his persistence to learn the ways of The Ancient One pays off and although his selfish attempts to fix himself to get back to his old life, he discovers a greater evil occurring in the way of fallen student Kaecilius (Mads Mikkelsen) who strives for immortality and believes the ‘Ancient One’ (played by Tilda Swindon  (The Grand Budapest Hotel) really commanded her role as Ancient One) is holding back powers and even makes Strange question his teacher’s explanation on how she has lived so long. But there is a greater case of concern as behind Kaecilius and lurking within the backdrop of the story is Dormammu who only comes into play at the last 15 minutes of the film in a time loop with Strange that I found rather funny as Strange’s persistent annoyance really tests the patience of Dormammu.

Mads Mikkelson (Rogue One: A Star Wars Story) portrays the villain Kaecilius character as well as he can. Although not my favorite villain in MCU, I think Mikkelsen does a fine is a brilliant performer, although he’s a bit of a shallow villain in this and is given very limited time in the movie as is much the same for Rachel McAdams (Southpaw) who was great (and underused) in her role rightly upgraded from, I think Night Nurse (as Rosario Dawson’s Claire Temple is another version of Night Nurse in the same MCU)
to a doctor and she commanded the screen quite equally with Cumberbatch in their scenes together. I hope McAdams is back in further sequels and not dropped as quickly by the MCU in the same way Jane Foster was.

Director Scott Derrickson (The Exorcism of Emily Rose and The Day the Earth Stood Still ) should be commended for the film’s visual appeal. The speculator effects shown in Doctor Strange showing us dimensions never seen before and I have to mention the Director of Photography Ben Davis who previously worked on Kick-Ass, Guardians of the Galaxy and Avengers: Age of Ultron manages to visualise in a way that the audience isn’t lost with what it is witnessing along with Tilda Swinton’s explanation of the world of sorcery.

The visuals were rapid and and eye catching that helped  engage the storyline and the introduction of one of the most interesting Marvel heroes making ‘Doctor Strange’ a must watch for comic book fans and movie goers alike. I do hope Marvel make some more standalone Doctor Strange movies as I feel he would be wasted as just a team member in future productions.