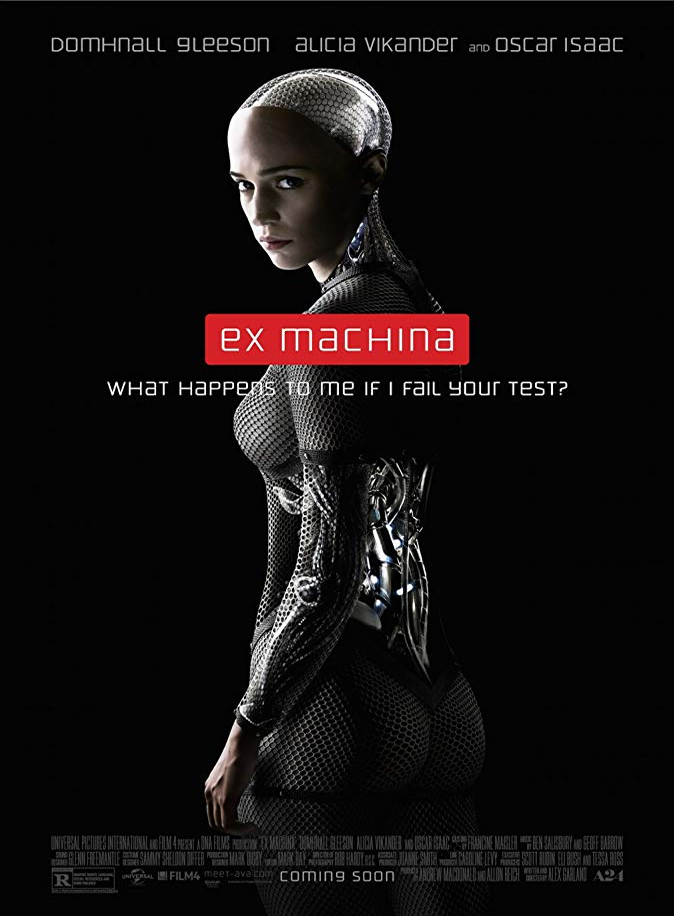 Caleb is a programmer who works for Bluebook an internet search engine company and is selected through the guise of “winning” a prize to his bosses retreat or so he is lead to believe and ends up participating in a ground-breaking experiment in synthetic intelligence by evaluating the human qualities of a humanoid A.I. named Ava.

Oscar Isaac plays Nathan, the head and creator of The Bluebook Corporation who specially selects Caleb to test out his latest creation. Caleb’s role is to determine whether Ava, a female robot played by Alicia Vikander, is the first truly artificially intelligent lifeform.

Ex Machina has only three main characters throughout the movie and the retreat buried inside and on the side of a mountain gives the sets a claustrophobic feel as most of the activities are set inside the building with no windows. The sets are also very clinical in presentation and adding the lighting from very bright lit rooms to sudden darkness in the next shot. If anything all these ingredients appear to be deliberate by director Alex Garland who not only directs the character of Caleb to have an uncomfortable week away from his life but also the audience member.

Very early on in the movie you can sense there may be issues in the relationship with Nathan and Ava (hence why Caleb is called for) in fact thinking about it I’m not sure I can recall all three characters interacting together on screen once and perhaps this is why the feel to the film in slightly unnerving as there is no relationship development between all three but as paired off from Nathan and Ava’s clear uncomfortable tension to Nathan and Caleb relationship where it appears at the beginning Nathan specifically handpicked Caleb as the best programmer and looks like he just wants to share his creation with someone he likes and wants to befriend.  But the most interesting relationship is the one between Caleb and Ava for me.

I like the way Caleb wasn’t portrayed as someone too much in awe of this creation which suggests pretty much right away that the character has an understanding, an open mind and an interest in Ava. There are numerous twists and turns along the way as the story unfolds but early on we are given the impression that Caleb is not in full possession of the facts and reasons behind his visit to Nathan’s headquarters.

Ex Machina is a great movie that intrigues and pulls you into a beautifully written script and will intoxicate you scene by scene as the story unfolds. Isacc and Gleeson’s characters although aren’t exactly developed fully still interest and perhaps works in the story of two strangers, working, understanding and appear to have a mutual respect for each other’s work.

Alicia Vikander for me stole the show as Ava and portrays a realistic A.I. Humanoid who strangely you relate to and sympathise with instantly. The story itself relies up to a point the early exposition and it is not until there is a power failure within the compound that Ava can say to Caleb under no closed circuit surveillance and Nathan’s watchful eye that Caleb shouldn’t trust Nathan as he isn’t what he appears.

This point in the movie is bang on the money as it just came at the right time and made the storyline in my book more complex and really made me think, who do I trust here? Is Ava’s intelligence so far advanced that she is either developing concern? Or more worryingly is she that developed that she has her own agenda?

Watching this really does make you think how far can a machines Programme develop and where would it stop. Also concerns with Nathan’s character all but confirmed that he also has his own agenda and it was only now I was sensing Caleb appears to be the pawn in this game as his feelings for Ava are growing stronger.

Visually Ex Machina is clever. I wouldn’t say stunning as in the sets but the CG for Ava was outstanding and you almost forget that it’s an actual living breathing actor under this illusion. The movie is also fast-paced, subtle and a complex take on this genre. The last 15-20 minutes are probably the best executed scenes I’ve watched in a while and will leave you stunned at its twist and will also leaving you feeling and thinking……what next? Highly recommended.