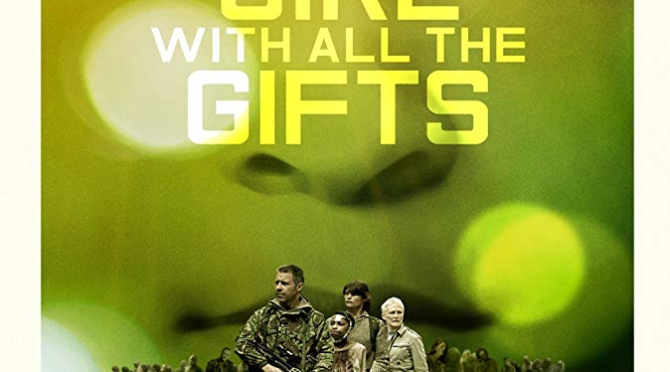 Plot: A scientist and a teacher living in a dystopian future embark on a journey of survival with a special young girl named Melanie.
Running Time: 1 hour 51 minutes
IMDB Score: 6.7

Why I watched it: The trailer looked interesting, and it seemed a different take on the Zombie genre, and of course it’s a good cast.

Random Thoughts: It’s safe to say genre fans are getting their full of zombies, it’s been a long run and for a lot of people they’ve run their course but for me I’m willing to give any horror film a chance sure I’m a tad tired of zombie but this one looked like they were coming from a different view point and this is based on the book of the same name.

What I liked: The biggest takeaway for me was the performance of young actress Sennia Nanua as Melanie, she’s very good and really it’s the lead part.  She lights up the screen, it’s a tough part but she brings charm and a lot of acting chops for a young actor.  She does have some good actors to play against.  It’s always nice seeing Glenn Close and the thing here is she hasn’t done a lot of genre work, she’s good here but her character is one note for the most part.

Gemma Arterton is an underrated actress, she could just skate by on her looks but she’s done a lot of good work and here she’s very good in a quiet performance.  This is a different zombie movie, different rules, the film feels very British horror to me, if you know what I mean, a little more quiet and deliberate.  The zombies look fine and they do pose a threat, the atmosphere is good here you never know what’s coming next as the film does a nice job of unfolding not only this new future but what the rules are and what has happened.

What I didn’t like:  I beat a couple of drums when it comes to movies especially genre films, tone and pacing.  Look for my money a genre film shouldn’t be much more than 1:30, keep it tight and no padding.  This film is way too long at almost two hours and what this does is just ruin the pace of the film.  The film for the most part is boring, there’s no sense of urgency.  A lot of this film is our main cast walking around, and nothing happens.  The film needed to be tighter and honestly if you’re making a zombie film this long then we either need lots of plot or lots of character work and this film gives us neither.  The biggest shame here is except for Melanie we don’t get to know the characters, we get types and types by what they do, teacher, doctor, solider that’s  it.

Glenn Close’s character is so one note she actually has one note, she wants to operate on Melaine take out her brain and come up with a cure for the zombie fungus as she calls it, now there’s no way she could know this would work but the whole film that’s all she wants to do, she’s wounded and it doesn’t look like she can live much longer and she’s all just let me do this Melanie, seems very forced.

The main problem with the film is that it has no ending, we don’t know what would save the world and the film feels like it’s just wandering, stalling till either they run out of film or something comes to them.  I will say this about the ending it’s pretty much a non ending.

Final thoughts: I liked the acting and actors, but at the end of the day there is no excuse to make a boring zombie movie.  There’s some good stuff in here but not enough to sit through 1 hour and 51 minutes.