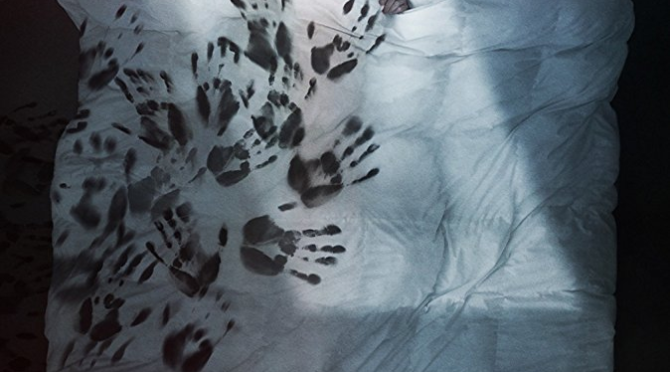 Plot:  A family unknowingly awakens an ancient supernatural entity on a Grand Canyon vacation, and must fight for survival when it follows them home.
Running time: 1 hour 32 minutes
Rotten Tomatoes Score:  Critics  3%    Audience   20%

Why I watched it: Well my go to answer is of course cause it’s a horror film and especially now since this is the horror season I took a chance with this one even though the reviews were terrible.

Thoughts: I know you look at the Rotten Tomatoes scores and you go “good God, is it that bad”  Well one thing a lot of critics passed on this one but there was a lot of audience reviews and yup 20%.  One thing is there’s some talented people here and some people who have done very good genre work.

What I liked: Have to be honest there isn’t much to like here, first of this isn’t a horrible movie just very flawed and very boring, we’ve all seen worse.  So what I liked?  Let me thing, alright here’s one, the idea of that these demons or whatever you want to call them is haunting their house that they’ve come into this family’s life because of the ancient stones.  I did like that they preyed on the family’s weakness and tried to destroy them that way.

What I didn’t like: This film feels like it got trimmed down, you have Matt Walsh and Jennifer Morrison in the beginning being this family’s closest friends yet they don’t show up again and aren’t talked about.  Also my goodness this is more of a melodrama than a horror film, they throw everything at this family, a dad you has a high pressure job, mother who is an ex-alcoholic, daughter has an eating disorder, son is autistic, father had an affair and might be tempted again.  Oh my that’s a lot for a horror film.  The horror part gets the shaft here, this is just lazy writing, nothing is scary here, nothing is new things happen then it’s dropped and something else happens.  The film feels disjointed and seems half assed.  There is absolutely no energy to this film, it feels limp.

Kevin Bacon is a good actor but here he seems bored and really lost.  He’s going through the motions, the man has done some damn fine genre films but here he never gets a handle on his character.  Even a Diner reunion with Paul Reiser doesn’t help.

Director Greg McLean has done some good horror films in the past but you couldn’t tell from this, you could say there had to be studio interference but Blum House did this, they know horror films.  The film just comes off shoddy and cliched to the point that if this was a film in the 80′s it would be dated. I also would like to say the way they portray  the son, alright he’s autistic but come on do more than that, that’s the only character trait he has, they use it as a plot device.  this film fails on almost every level.

Final thoughts: It’s a bad horror film, not the so bad you can laugh at it but it’s so bad you just want to forget you wasted your time on it.  A horror film that isn’t even a little bit scary, or tense is not worth your time especially this close to Halloween.