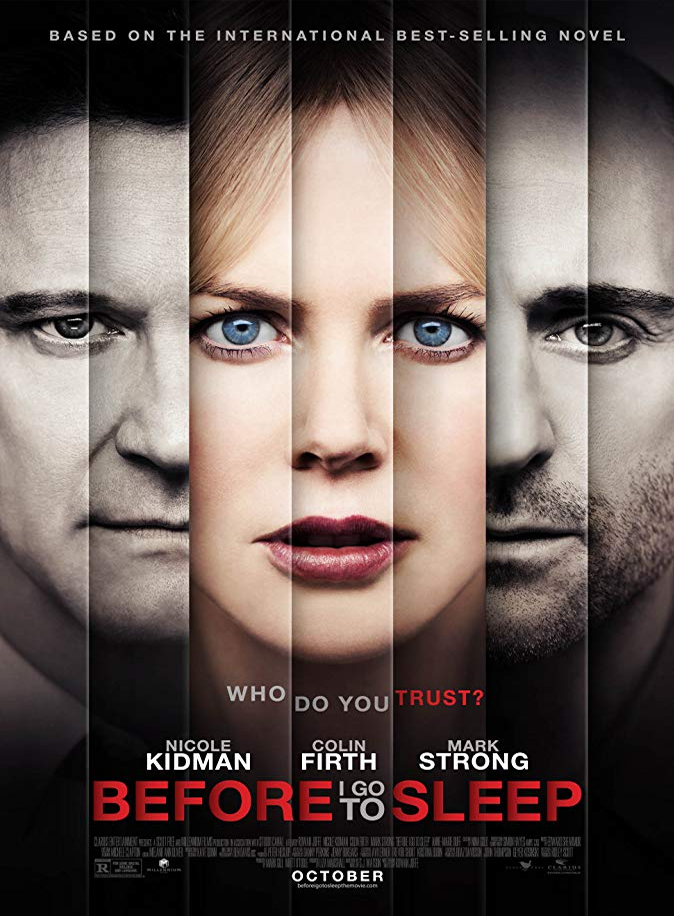 Plot:  A woman wakes up every day, remembering nothing as a result of a traumatic accident in her past. One day, new terrifying truths emerge that force her to question everyone around her.

Why I watched it: I almost didn’t, the reviews were bad and the trailer looked boring and a tad silly but I decided to give it a chance mainly because of the cast and the fact that it had a short running time.

Random thoughts: I have to admit I’m not the biggest Nicole Kidman fan,I liked her early work and now she just doesn’t interest me don’t get me wrong a good actress but her choices of roles leave me cold.  I’m a huge Mark Strong fan and I wish he could find that breakout role and also break the stereotypes he keeps playing.

What I liked: Going in I knew this was a Memento knockoff and was prepared to just shake my head but I will say this they handle the gimmick well and I will give credit where credit is due Nicole Kidman is very good here, it’s a showy part but also a tough one, every time she wakes up she’s a blank slate and this good have been silly but Kidman does give it weight and she does give a very nuanced performance.  She’s the main reason to watch this film. Now I won’t go into spoilers but it’s tricky cause this film is all about the twists and turns and on that level I liked it cause I didn’t know where it was going and some of the twists were pretty good, it got me a few times.

I pretty much knew that someone was lying and it would end up as the whole this is not what it seems bit.  I think one thing the film did well was the casting cause you have Strong who always plays the bad guys and Firth who is charming and always the good guy but since this film wants you to guess what is going on both actors get to play type and against it. The one thing that I thought was different is that Kidman finds out some hard truths about herself and yes she finds out more than she wanted to know.  The film does move pretty well after the first twenty minutes of set up and the film does build tension and does so right to the very end.

What I didn’t like: First things firsts the film is a tad silly and really over the top with some of the twists and you do have to suspend your disbelief hard on this one.  Some of the twists are cool but really make little sense.

Also there is a lot of violence against women here, well against Kidman she gets battered and it was very uncomfortable, I think they pushed a bit to far with it.  Now I also thought they made one character so evil and so deranged that you didn’t believe what came first cause no way they didn’t show their true selves before.

Final thoughts: I actually liked this film more than I thought, yes it has flaws but it sucked me in and I actually invested in the characters, to me this was an old time potboiler didn’t make a lot of sense but it was well acted and compelling.