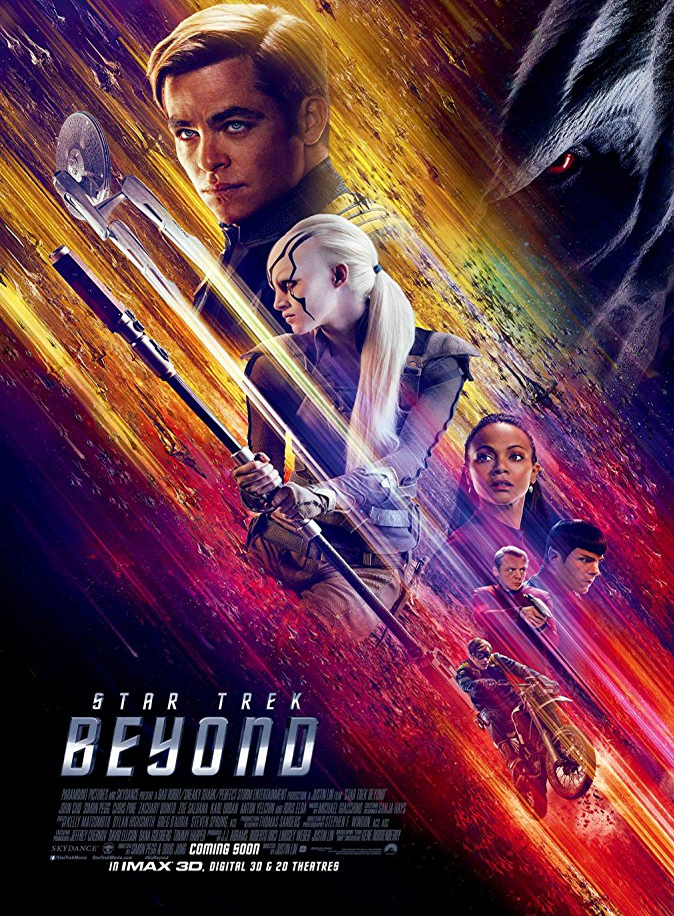 Plot:  The U.S.S. Enterprise crew explores the furthest reaches of uncharted space, where they encounter a new ruthless enemy, who puts them, and everything the Federation stands for, to the test.
Running Time: 2 hours 2 minutes
Rotten Tomatoes Score: Critics 84%    Audience  80%

Why I watched it: I dragged my feet on this one, I’ve seen all the ‪Star Trek‬ movies but Into Darkness bummed me out and I didn’t have the desire to rush to see the new one.

Thoughts: This ‪Star Trek‬ franchise is a strange duck, they want to be different, different time lines and realities but they also want to keep some of the old chestnuts that made the original so loved.  I liked the first one but Into Darkness was not good, I didn’t even get through it and that’s saying something since I’ve watched all the ‪Star Trek‬ movies.  They lost the tone and it was something they needed to get back cause they lost the heart of Star Trek.

What I liked: They got the tone and heart back for the most part.  This felt like a ‪Star Trek‬ movie and I credit the screenplay and director Justin Lin for turning it around.  It’s not perfect but it did hit what Star Trek should be and it’s the best of the three for me.  They felt sure of themselves this time and the actors have a grip on their roles, for the most part it’s their’s now.

I really liked the scope and the look of the film.  This is a nice looking film and all the technical stuff is very good.  Also the stakes are high here and there’s real tension.  They got a very good villain played by Idris Elba, here’s a very bad dude and scary.  I also liked the addition of Sofia Boutella, it’s hard to add someone knew to Star Trek cause you already have some many characters but she stands out as a different character, liked her look and they why her arc played out.

The main cast is solid, Cho and Saldana get short changed as neither had much to do.  Pine seems comfortable now and he’s grown up a bit in this role, he’s a steady influence now.  Urban is underrated MVP or the glue that keeps things together as it’s too bad Spock and Kirk don’t have a lot to do together but Urban as Bones is that bridge to both characters. My favorite part of the film is the early attack that sets everything up, it’s done very well, the stakes felt high and it was very well shot.

What I didn’t Like: I liked the villain and I like Idris Elba but sticking him in that much make up is just mean, not only is he an attractive actor but he’s very charismatic and this role didn’t showcase that, now we dos see him out of makeup but I will say it was off putting.  Also how his character change physically is not explained.
Now the most off putting thing about Into Darkness was the heavy political overtones now here it’snot as bad but still they tend to beat us over the head with their views, a lighter touch would be better. I still think there’s room to go deeper with the main characters and I still think they’re just scratching the surface.  I would also like to see them not rely so much on the older series, they need a stamp for this franchise and they haven’t found it yet.

Final Thoughts: I was almost giving up on the franchise but now I hope they do more.  Also what to say I like how they did Ambassador Spock, it was a nice moment for him.