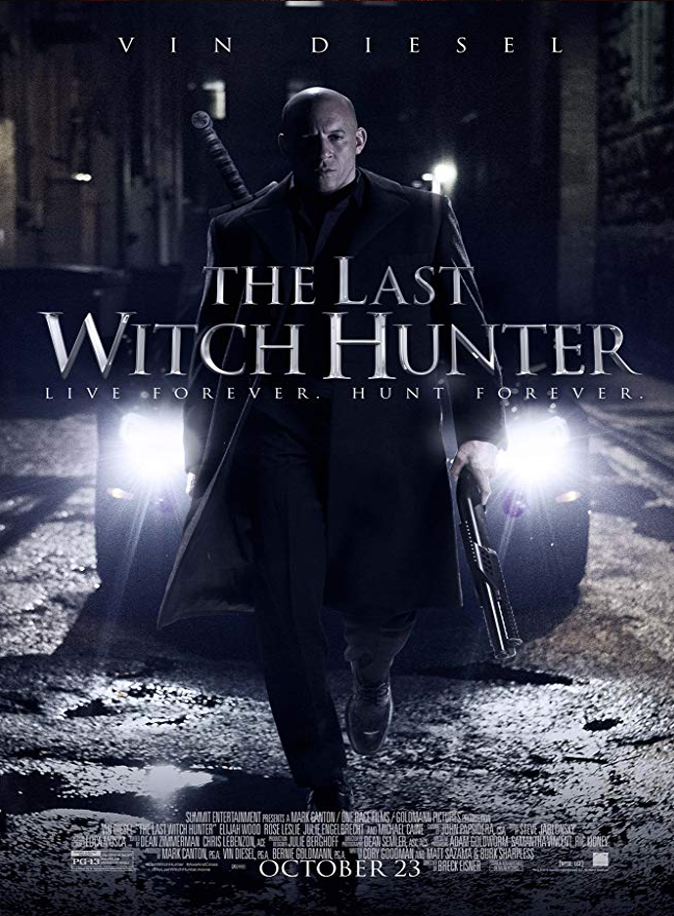 ‪Plot: The last witch hunter is all that stands between humanity and the combined forces of the most horrifying witches in history.‬
‪Running Time: 1 hour 46 minutes ‬
‪Rotten Tomatoes Score: Critics  17%    Audience 43%‬

‪Why I watched it: I’ll be honest I dragged my feet on it, I started it awhile ago got like 20 minutes in then something came up might to get back to it but didn’t then finally I was looking at my Netflix list and said I have to finish it and I did.  So the why it’s genre and I don’t mind the director. ‬

‪Thoughts: This is meant as a franchise, and it’s a mix of action, kind of horror but more fantasy, Diesel still looking for something other than just the Fast And Furious films.‬

‪What I liked: I like the world building here, it isn’t new but I like the use of magic and witches that they exist and Diesel is like the police he keeps them scared and for the most part behaving, in that the film did remind me of Men In Black. Diesel is fine here, he kind of just does the same thing now, he’s cool, he’s a badass that’s it but here he does seem to be having fun and he goes with it, not a great performance but he’s trying at least a bit here. I really liked Rose Leslie here, I’m not A Game of Thrones watcher so I haven’t see her in much but I liked her energy and she had chemistry with Diesel and she didn’t sleep walk she tried to flesh out a stock character and she did a good job.‬

‪What I Didn’t Like: The CGI was pretty bad across the board, if there going to be that crappy then go practical cause it did hurt the film. The whole technical side was just so so nothing stood out. I think the thing that it hurt it the most was the lack of a solid threat as a bad guy, they had two here and both were boring, stock villains with no real character, they want to destroy the world, really?  The threat was boring and it’s too bad cause I did like the world building but when it came to the villains motivations and the couple of twist they threw in, well to be put it bluntly it was boring and very lazy.  They could have done more with the idea.  That’s the thing here they had an idea and a main character and never worked it out made it interesting.‬

‪Also they wasted Michael Caine, I have on idea why he was in this movie, maybe he had a free couple of days, the part certainly didn’t need an actor like Caine.  Same with Elijah Wood, he seemed off like he wasn’t sure what movie he was in and he gives a very bland and blah performance, he’s a genre guy he could do this in his sleep but he came up empty here.‬

‪Final Thoughts: I didn’t think it was as bad as the buzz, it was a misfire but it was breezy enough to make it watchable.‬