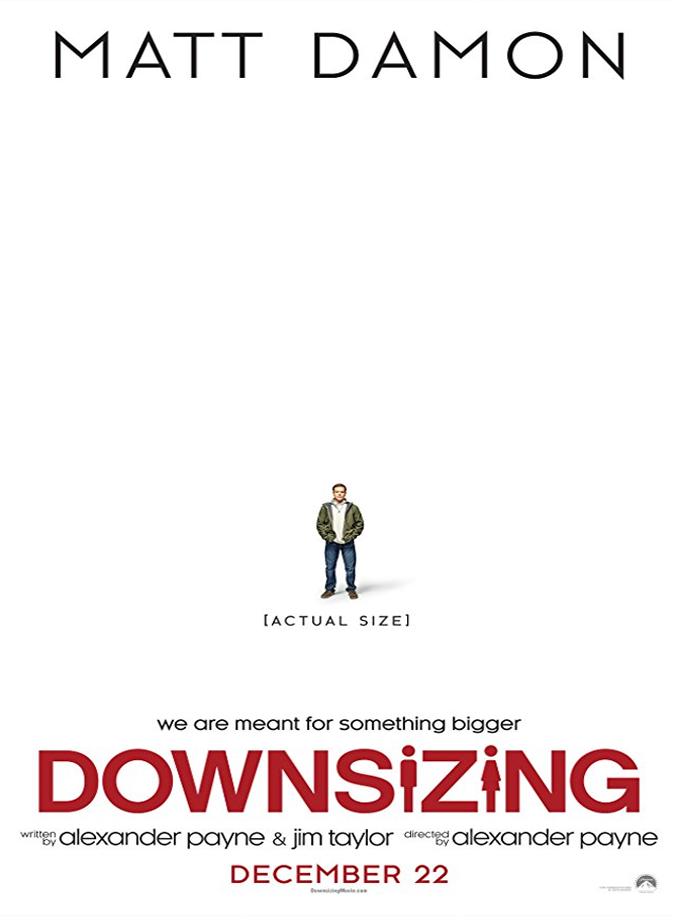 I saw the trailer for “Downsizing” in December when I went to see “The Last Jedi” and I have to admit at being impressed with what looked like a clever and humorous film by Alexander Payne.

The movie is about a man realising he would have a better life if he were to shrink himself to five inches tall, allowing him to live in wealth and splendour. Sounds nuts right? But the introduction and the explanation to this scientific breakthrough was actually explained well and executed just fine to set up what I felt was going to be an entertaining two hours.

Paul Safranek (Matt Damon) and his wife Audrey (Kristen Wiig), are an average couple living an average but stressful life in Omaha decide to “Downsize” to be able to have a glamorous life in a miniature purpose built community they could never afford in “real size world”. The couple at first have their reservations on going through with what is an irreversible procedure, but once one of the agents talks them through the benefits of “Downsizing” it’s a no brainer, well at least for Paul. Even in these early scenes you can sense Audrey isn’t quite where Paul is at and this is one of the issues I had with the trailer. It explained to us what happens with Audrey backing out of the procedure unknown to Paul.

Don’t get me wrong, Matt Damon’s reaction to finding out he is 5 inches tall and excited to start his new life with his 5 inch tall wife is brought to a shuddering halt when he realises Audrey withdrew from the program in mid procedure was actually rather funny and his rant to her did make me laugh. Well I say mid procedure, it was actually after the medical staff began to shave her head that she did a runner leaving Paul in a rather awkward predicament. From here the movie is actually decent and going along nicely. The trailer portrayed and lead us to believe that this was going to be quite a quirky comedy with some dazzling effects and a great cast.

One of the issues I have with this film and its storylines direction. For a movie that appeared to be a light hearted comedy with a spin on it actually begins to unravel having no real plot and comes across a little preachy. I have to say that it felt like I was watching three different short movies with the first short movie being the best.

Matt Damon like the movie starts off well and to be honest begins to bore me. The character of Paul wasn’t exactly a joy to be around in the first place apart from a few funny scenes at the beginning and Kristen Wiig disappointingly has very limited screen time in “Downsizing” I say disappointingly because when you have someone with the caliber of Wiig, you use it to its full potential. The same can be said for Jason Sudeikis who plays Dave Johnson. Sudeikis is in and out the movie and used very sparingly which frustrated me a little and only turns up with a bit of advice and wisdom every now and again. Christoph Waltz is on another level in his abilities as an actor usually and I always look forward to seeing his next character. Here he plays Paul’s neighbour Dusan Mirkovic. An uninteresting character if I’m honest that doesn’t offer much and it almost feels like Waltz took this role on as a favour. The actor doesn’t appear to have his spark in this movie and really just looks like he is going through the motions until the director says “Cut”

Speaking of the Director. Alexander Payne is the man who gave us About Schmidt (2002), Sideways (2004) and The Descendants (2011) all decent films. Payne is also responsible for writing these movies and this is why I felt this movie would be decent at least. The problem with this movie is the element and novelty of the Downsizing factor is quickly forgotten about as you enter the second half of this movie and the audience isn’t reminded that these characters are only five inches tall, which makes the experience disjointed and not pleasant to watch. Overall “Downsizing” offered more in its trailer than it did in its finished product. The concept was enticing, it’s cast showed have been entertaining and we trusted Writer / Director to have executed this movie in a better way. Disappointing.