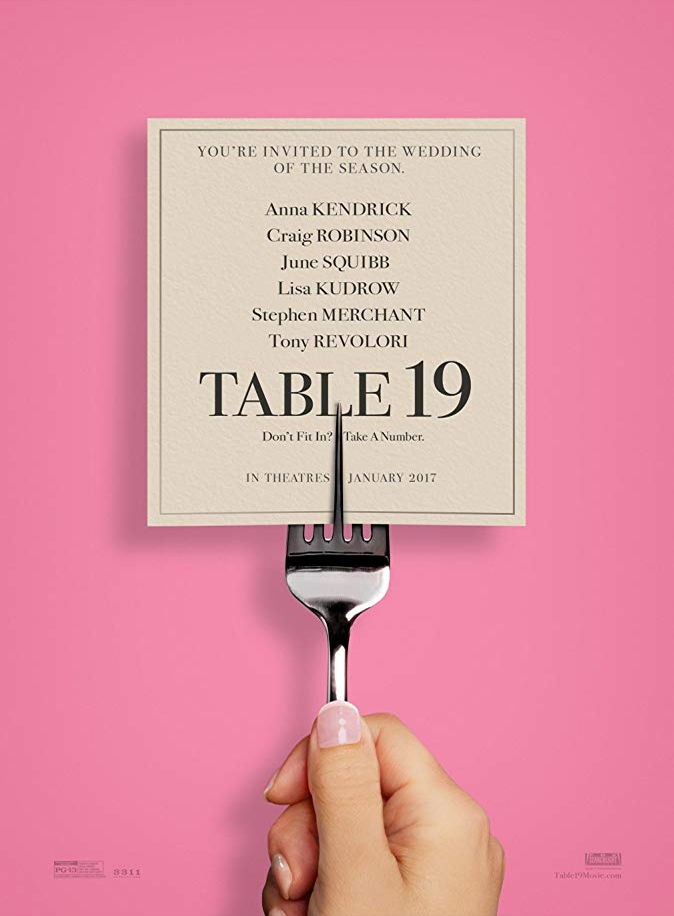 Plot:  Eloise, having been relieved of maid of honour duties after being unceremoniously dumped by the best man via text, decides to attend the wedding anyway, only to find herself seated with five fellow unwanted guests at the dreaded Table 19.

Why I Watched It: This is one of those I should take a break from genre and watch something out of my wheelhouse movies, I like Anna Kendrick and the trailers looked alright.

Random Thoughts: The story was written by the Duplass Brothers, not the screenplay though and that is telling.  Anna Kendrick is a very likeable presence and she brings charm but at times she feels like she’s holding back sometimes playing too safe a role. This film got very bad reviews and the thing I see is the film was not marketed very well, you didn’t get the sense of what this film was and after watching it I can say it’s not an all out comedy this films like an Indie comedy/drama about quirky characters.

What I liked: I really didn’t know what I was steeping into and the first third almost made me want to stop watching but I’ll save that for the what I didn’t like part, when the film starts developing the people sitting at Table 19 then the film becomes much more interesting.  They start off showing these strange/quirky characters, you know the type the ones with the one personality trait but they do go deeper and I like the fact that they showed how a bunch of strangers can connect at a wedding, or work, or stuck on a train, you throw different people together and see if they can click and here it worked for me because they had some very good actors to work with.

The acting here is pretty good, Kendrick is stuck with a tough role, she’s been dumped and there’s a lot more melodrama than we needed and actually her part is a romantic comedy cliched I’m very tired of and at times it doesn’t fit this movie.  I liked Kudrow and Robinson as a married couple that have forgotten why they’re together anymore, they take it beyond bickering to actually explore their relationship, thy have a couple of nice scenes near the end, plus we don’t often get to see people over 40 explore a relationship.  June Squibb squeezes more than she should have in her underwritten role but she’s also very good near the end.  That’s the funny thing with this movie that almost everything and everyone is better in the second half because I think that’s when they leave the “comedy” part and start exploring characters and I’m glad they did.

What I didn’t like: This film kind of fights itself, cause at first it really seems like it wants to be this quirky comedy and then it wants to be this very formulaic romantic comedy and then it throws it stuff that fights the cliches, there’s a decent moment when Kendrick’s character meets someone else and you think oh alright we’re changing it up but nope it goes back to the formula. The film to me is really a movie of two halves, the first half was boring and it dragged then in the second we started to have the humour be more character based and it worked better.  I blame some of this on the direction which is bland and that’s being kind, this is a short movie at under 90 minutes and you can tell the director didn’t fully no what direction he should go in.

The weakest part for me was the relationship with Kendrick and Wyatt Russell, Russell is a decent actor and he plays bad guys well but not so much a romantic leading man and their relationship is the really badly written, when they have the big fight to say what they didn’t say it seems really silly and not really thought out it was a plot point not a real drama and also points against the film for having a key moment when one of the couple is chasing after another one who is on a boat leaving but they scream and try to say everything they should have said before.  So cliched and it rings false.

Final Thoughts: This good have been a really good film and I have to say the second half saved it for me and I liked it more than I thought, it does fall into the “well it wasn’t that bad, for all the bad reviews” it was decent.