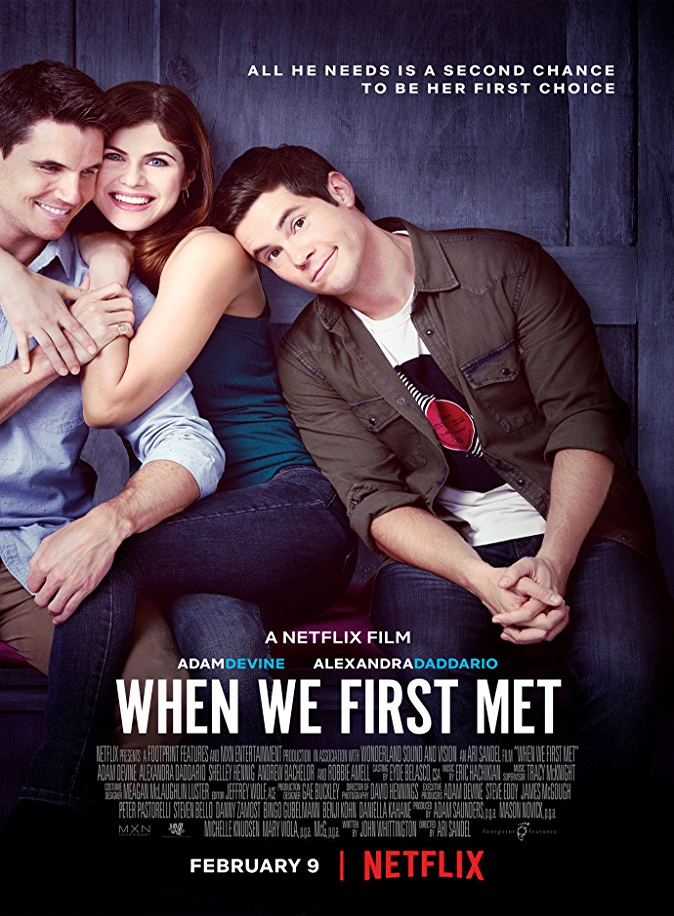 Plot:  Noah spends the perfect first night with Avery, the girl of his dreams, but gets relegated to the friend zone. He spends the next three years wondering what went wrong – until he gets the unexpected chance to travel back in time and alter that night – and his fate – over and over again.
Running Time: 1 hour 37 Minutes
IMDB Score: 6.5

Why I Watched: It was on Netflix and I call these type of films a change of pace for me to break up all my genre watching, also good to watch something a bit lighter, but I’m not the biggest romantic comedy guy so it needs a hook and this one had it for me.

Random Thoughts: Watching the trailer you might think this is a Groundhog Day type movie about repeating the same day over and over until you get it right but it’s not it’s more of a time travel movie it’s about making a decision to go back and correct a wrong.  This is also a Netflix original, that’s why the plot description is a little off, it doesn’t have one that I could find.

What I liked: I went in not excepting a whole lot, now Adam Devine is hit or miss for me, if he reels it in he can be funny but sometimes I think he mugs too much and he goes over the top, he plays for the back row a lot.  Now with this role he does do those things but he also shows some heart and he always dials it back enough that he’s likeable. The thing the film has going for is it’s cast all four leads are likeable and there’s really no bad guy.

The thing I liked the most about the film is that it asks a question that not many romantic comedies ask, should these two be together and what happens if they’re better off not together.  It also asks what do I have to do to make someone else happy. The film had heart and for this type of film a brain as well.  Don’t get me wrong the film is a very board comedy as Devine does go back a few times cause things keep going wrong, and what’s cool sometimes he gets the girl but not in the way he wanted.  There’s a life lesson in there sometimes things happen for a reason and sometimes what you want isn’t what you need.

I did laugh at the film, these a few jokes that are pretty good but this is more of a film that makes you smile more than laugh out loud, it’s not a gross out comedy and there’s not a lot of poop jokes which I like.  It has some meanings but in noway is the film heavy handed and yes there’s a bunch of stuff borrowed from other films but I will give them credit there’s a twist in the third act that I didn’t see coming and that’s saying something about a romantic comedy cause most of them are told in a straight line, not this one.

What I didn’t Like: Like I said the film can be a little board at times and the first 20 minutes isn’t great, the film does get better but they could have done a better job with the set up. Robbie Amell is wasted here, he plays a good looking nice guy, that’s it, that’s his character, now it helps that he is good looking and likeable but he should have been fleshed out more.  I will say I didn’t care for Shelley Henning and to be honest it isn’t till half way through that she’s even a major player but once they focused on her and let her do something more than be mean and sarcastic she’s pretty good, so half a nit pick there.
The only other pick would be that it’s a tad long for the story it could have been tighter and a little leaner.

Final Thoughts: A pleasant surprise, not a film I would run to watch but I’m glad I did, it’s always good to get out of you comfort zone, I thought in the end it was a sweet movie and did things most films of this genre don’t do.