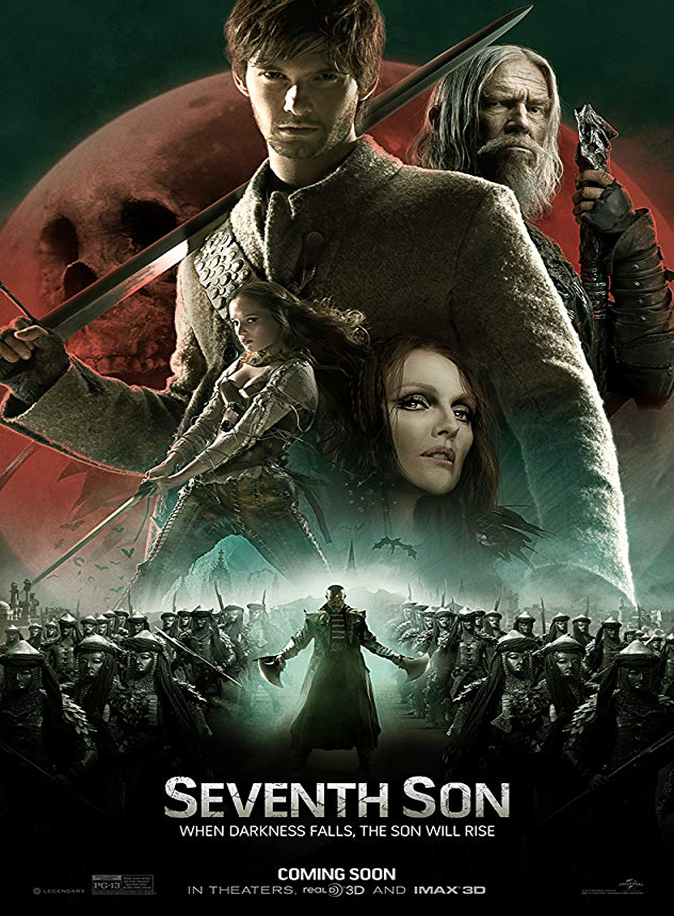 Plot:  When Mother Malkin, the queen of evil witches, escapes the pit she was imprisoned in by professional monster hunter Spook decades ago and kills his apprentice, he recruits young Tom, the seventh son of the seventh son, to help him.

Why I Watched it: Well this film has a history, it was sitting on the shelf for awhile and then when it finally got jumped into theatres it got terrible reviews.  So I wanted to see how bad it was and also that’s a pretty good cast.

Random Thoughts: You know a film has been sitting for awhile when the supporting actors are actually names by the time the film comes out, Kit Harington is only in the beginning and Alicia Vikander who is now a Tomb Raider is the love interest here.  Both deserve better and have gotten it.

What I Liked: This was a huge bomb when it came out and it lost a ton of money so let’s start off by trying to be kind.  Give me a moment. The cast, it’s the only good thing in this movie, these are really good actors and to their credit they’re trying, but this is yet more proof that good to even great actors can’t save a bad script or a dumb script.  Oddly even though he isn’t in it much Harington showed enough to where I think he should have been the lead.  Bridges is playing the Jeff Bridges part and at first it was annoying but he grows on you, there just isn’t much there but he brings heart and so much talent and to his credit he’s not sleep walking he’s all in.  Julianne Moore is a certain age and as an actress she’s no longer the lead unless it’s an indie film so she’s taking these villain roles, she’s fine here and she actually doesn’t chew scenery she’s also going for it.

The action isn’t great but I did like the first big scene it was well done and it worked pretty well to set things up.

What I didn’t like: I mentioned the script, it’s bad and yes it’s one of those YA movies that is based on a series of books and yes it’s a bout a chosen one, we know this story and honestly they do nothing different.  Also the story is just so lackluster, there is no life in this story at all.

Ben Barnes is a decent actor but he’s so boring here, I should say bland and he has no chemistry with Vikander at all, she’s fine but she seems a bit lost with her character, to her defense it’s a badly written cliched character.

The most disappointing thing about the film is the look, this looks cheap and the production design is pretty bad, it’s so dark looking and blah, so I have to say the cinematography is really bad.  Everything in this film is just off, except for the acting it’s all below standard.  If this film is going to work as a fantasy we need to see this different and amazing fantasy world and here we don’t get it, we almost get Sci-Fy channel type effects and look.

In the end the story is just not different enough, it’s Harry Potter, well a knock-off, I didn’t care one bit and the sad thing is the story is boring you just don’t care I wasn’t engaged one bit even though I liked most of the actors.

Final Thoughts: Not a great movie, though it’s watchable, come on anything with Jeff Bridges and Julianne Moore can’t be all bad.