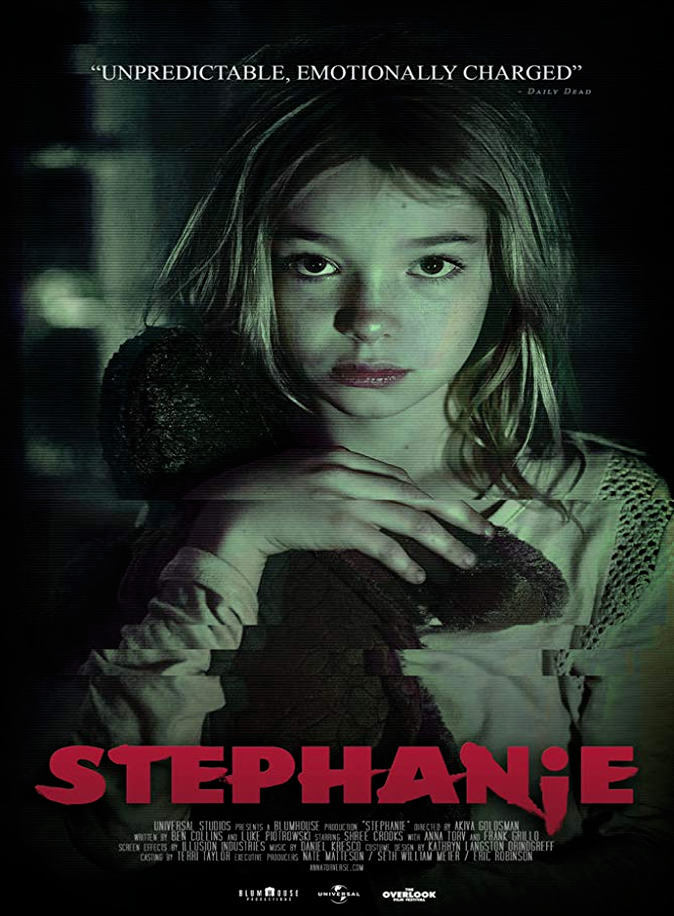 Plot:  After a mysterious global crisis, a young girl is left alone to hide from a malevolent power that stalks her home. Her parents eventually return and the struggle begins to save their daughter.

Why I Watched It: I wasn’t sure about this one but Frank Grillo and the fact it was kind of a horror movie won me over.

Random Thoughts: Akiva Goldsman is mostly known as a screenwriter and producer, now he infamous and famous he wrote A Beautiful Mind and also wrote Batman And Robin and he directed Winter’s Tale, so let’s say some people love him and other’s not so much.  The odd thing this time out is he didn’t write Stephanie, now I’m sure he did some changes but officially he didn’t write it.

The odd thing with this movie is I knew nothing about it and before it came on Netflix I didn’t know it existed.  I don’t think this got a theatrical release if it did i was small.  The reason I think it’s a hard film to put in a genre and if you try it won’t fit that well and also the film is kind of hard to explain without giving things away.

What I Liked: This is a very different film, and I like that.  So many horror films or genre films are just cliched and are just cutting and pasting from other films, Stephanie is something I hadn’t really seen before.  The film is very sparse, it’s not a big budget special effect film this is a very quiet film and to be honest for over half the film you really don’t know what it’s a about.

The film is pretty much made up of just the three main actors and all are good and young actress Shree Crooks is someone to keep an eye on cause she carries this film and most of the time she’s onscreen by herself.  Grillo and Torv turn up I would say about half way through and both are good.  What I like about their performances is that both are deal with the same thing but do it completely different, Torv is cold and kind of tense why Grillo is caring and hopeful and both work very well.

Like I said this is a very tough film to talk about and I think it’s why there hasn’t been a lot of buzz for the film, telling any of the plot pretty much gives the film away, this is one of those films you should go in cold, I did and I almost stopped watching it but I hung in and I was glad I did.  The film is a slow burn, we’re watching things unfold and we learn as we go and the film changes with each piece of new information we get.  For a horror/Sci-Fi film it’s more about the characters and emotions.  It turns out to be a gut punch movie. The biggest compliment I can give the film is that for most of it I had no idea where it was going, this film could have gone about 12 different ways and I would have thought it would have been valid.

What I Didn’t Like: The film is very slow to get started, the fact that the film is only 86 minutes and it still drags is a telling thing, we get way too much time just with Stephanie alone, it really does hamper the film, I’ll be honest after the first five minutes I started to get bored and like I said earlier almost stopped watching, no lie I liked the film but it’s a chore to get through the first 30 minutes.  Also the film’s tone is kind of off putting at first, the film toys with you and you’re not sure what’s going on and you’re also not sure if you care.

The other big knock is I don’t thing it’s much of a horror film there’s more Sci-Fi elements to it and yes there’s some tension but I wouldn’t say it’s a horror film.  The fact that the real plot is hidden from us also hurts us a viewer as we’re kept at an arm’s distance for most of the film so it made me fell a little detached and not completely invested. So this is kind of a spoiler but the film is a downer and a huge one at that so if you’re the kind of movie goer who likes their films to be nice and tidy and one where you’re smiling and happy at the end well this one is really not for you.

Final Thoughts: I liked it and I do think for people who are looking for a different take on a genre film this is well worth watching as it’s really under the radar right now but I will say the ending is a bit of a let down.