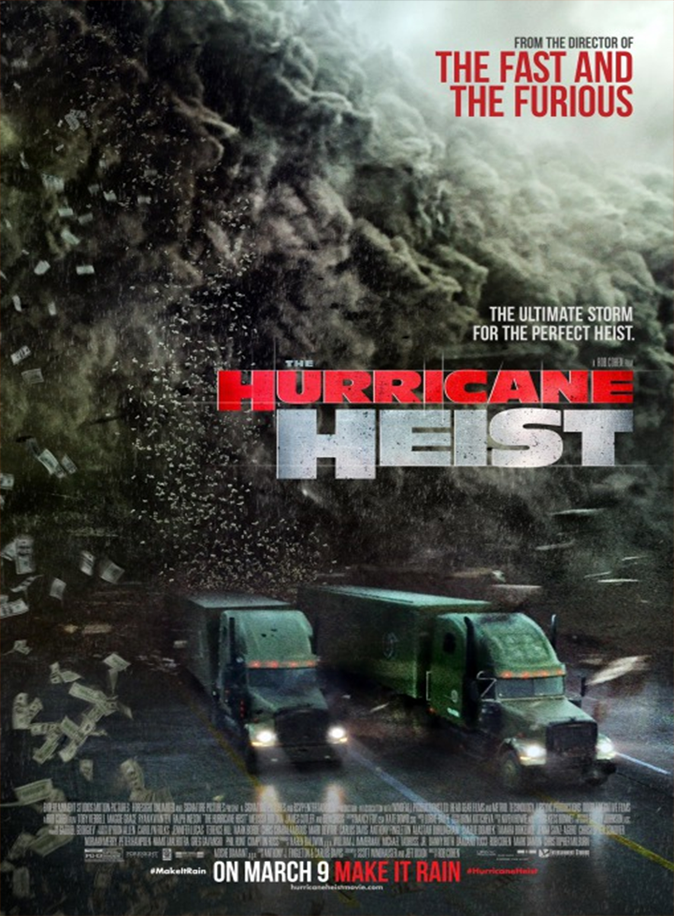 Plot:  Thieves attempt a massive heist against the U.S. Treasury as a Category 5 hurricane approaches one of its Mint facilities.

Why I Watched It: Well it was on sale at itunes and it looked like goofy cheesy fun.  Just for the record I paid $2.99 for it.

Random Thoughts: Rob Cohen takes a lot of crap from critics and to be fair he’s not a great director but he directs usually fun action genre films, nothing amazing but he sticks to what he knows and the man still works after some very bad films so let’s give him some credit.

Hurricane Heist is one of those films that are hard to review cause really I didn’t love or even like most of it but it means well and you don’t have the heart to pick on it.

I like most of the actors and it was good to see Maggie Grace play a strong and kickass character, she’s trying to get away from the Taken, victim role.  Ryan Kwanteen is good almost playing his True Blood character here.  It’s always nice to see Ben Cross, just saying.

What I Didn’t Like: I swear this is a remake of Hard Rain, right down to the character Ben Cross plays, honestly it is. By the way go look up Hard Rain, a solid and fun action storm/heist movie.

This film is so baldy miscast you swear they did it on purpose, only Grace is American yet everyone is playing Southern, poor Toby Kebbell, good actor but his accent is from Hee Haw,  even Kwanteen,he’s Australian but at least he has done a southern accent, but no one is southern here either don’t make them southern or hire southern actors.  Kwateen is wasted here he should have been the lead.

Alright the heist is boring and that is coming from someone who loves heist movies even bad ones but at least make the actually heist fun and it’s also a bad storm movie, the hurricane is out of Sharknado I swear.  Except for the talent involved this could have been a Sci-Fi channel movie.

It kind of comes back to Rob Cohen, he doesn’t do anything interesting with the premise either make this a kick ass action movie or a fun B-Movie romp and because he plays it down the middle it’s neither fish or fowl it’s just a kind of fun bad movie.

It’s too bad cause with either a little style or a bit of craziness this could have been a hoot, I look at something like Deep Rising and because of the writing and the tone the film worked Hurricane Heist could have been a good popcorn movie instead it’s more of a guilty pleasure, well kind of.

Final Thoughts: I almost kind of liked it, but it’s not that good and I won’t defend it but it means well.