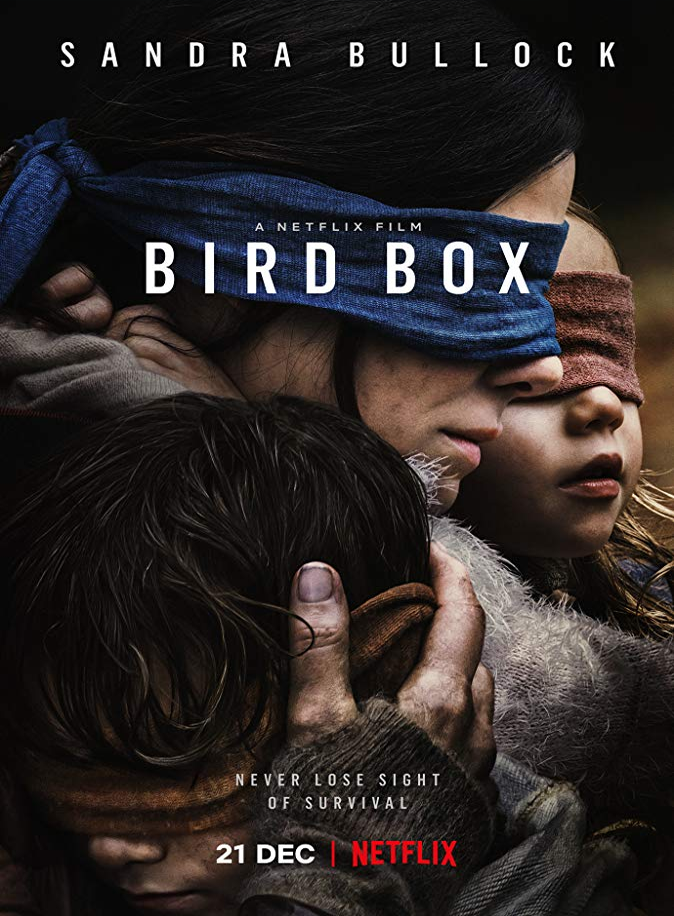 Netflix continues its commitment to high quality original content with this adaptation of the best-selling novel by Josh Malerman starring Sandra Bullock in her first major role for the small screen.

The film begins with Sandra Bullock loading two children into a boat and heading down river on a treacherous, two day journey. We flash back and forth between this journey and the five years leading up to her getting into that boat and explaining how she got there.

Bullock plays Malorie, a heavily pregnant artist who has largely disconnected from the world and uses her sister (Sarah Paulson) to bring her groceries and relay messages to her mother while she stays in her apartment painting dark images on canvas. Malorie is so out of touch with the world she isn’t even aware that a major unexplained event is happening in Russia that is causing people in their thousands to commit suicide. When her sister takes Malorie for her check-up at the hospital we realise that whatever is happening in Russia has now reached LA and things go apocalyptic very quickly.

In your usual post-apocalyptic setup, she takes shelter with a group of survivors. As they try to stay safe and figure out what the hell is going on there are the usual trust issues with each other and especially with anyone new who comes knocking. I have to give a special shout-out to John Malkovich at this point who is perfect (sorry, John) as the self-confessed ‘asshole’ of the group.

It’s soon discovered that strange creatures are to blame, and to merely look upon one of them makes you want to kill yourself instantly with whatever’s closest to hand. This is why any stills you’ve seen for this film probably show Sandra Bullock wearing a blindfold; apparently if you can’t see these creatures, they can’t hurt you. This is a brilliant plot device for creating suspense and fear, and the director does an excellent job using both.

Apart from the scene where the first outbreak of the phenomenon wreaks havoc on LA, this is mostly low-key character-driven sci-fi. If you’re looking for multiple explosions, spaceships and cyborg armies going to war with laser guns, you’re looking in the wrong place. In tone this is more akin to A Quiet Place, but where they had to keep quiet or the monsters would get them, Bullock and Co. have to avoid looking at them. Same problem, different sense.

There have been a lot of people comparing it to A Quiet Place, but another film it reminded me of was M. Night Shyamalan’s terribly misjudged The Happening. If you recall anything apart from how laughably bad that film was, you’ll remember it starts off with a bunch of unexplained mass-suicides. Well, this is the movie that film could have been.

Bullock is fantastic as the woman learning to connect with other people and the world at large over the course of the movie. There’s also a lot to be read into the film’s script which is incredibly well written and structured. I haven’t read the book so I’m not sure if screenwriter or author did the heavy-lifting, but it’s a story filled with lots of layers and allegory. I know what I think it’s about, but I won’t taint your perception by telling you. Watch it and see what you think it’s about. There’s lots in there to digest and I’m sure it’ll mean different things to different people.

This is the sort of film I really enjoy and I thought Bullock’s performance was remarkable. It’s a movie I can see myself watching multiple times and finding something new to appreciate on every viewing.