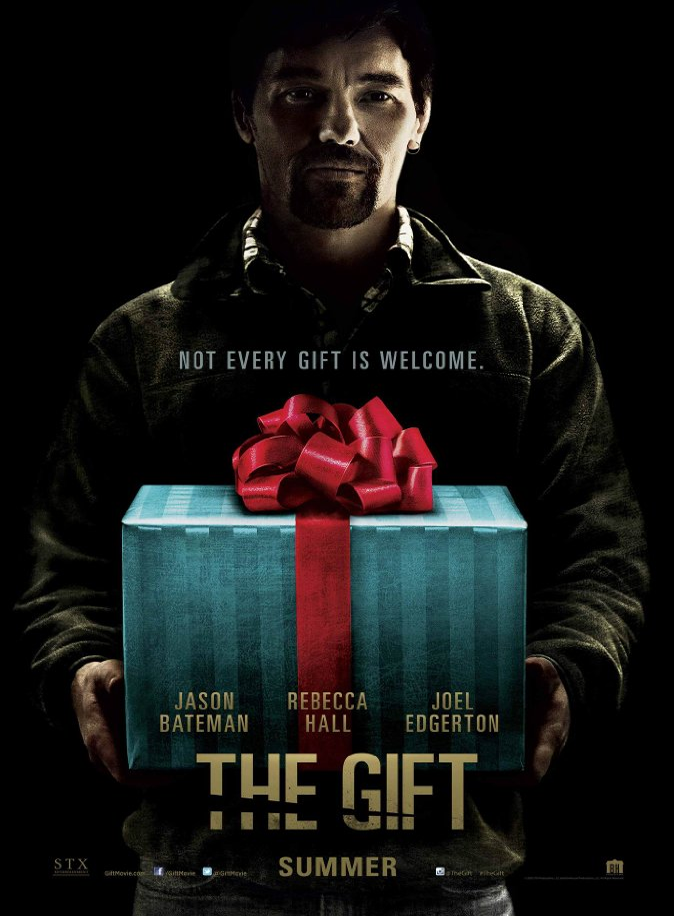 Plot:  A young married couple’s lives are thrown into a harrowing tailspin when an acquaintance from the husband’s past brings mysterious gifts and a horrifying secret to light after more than 20 years.

Running Time: 1 hour 48 minutes
Rotten Tomatoes Scores: Critics 92%    Audience 75%
Why I watched it: The reviews were great, had a strong buzz and the trailer held some promise, plus I’m a big fan of Rebecca Hall.

Random Thoughts: I’m not the biggest Joel Edgerton fan, he can be bland at times and I must say this film is billed on a big reveal, what’s the dark secret and those kinds of films can often times be disappointing.  I was also very curious to see Jason Bateman is a serious role.

What I liked: The Gift is not a CGI feast, it’s a small film, it’s also an adult film this is a thriller not about teenagers but about adults and also about the choices we make.  It’s easy to call this film a slow burn because to be honest the film takes it’s time revealing things the other thing about the film is that it’s not huge on action or jump scares the film is character driven.  We have more characters but really the film is about the three leads and each one gets fleshed out.  Far too many times a script will short change character for action The Gift is almost all about the characters, who they are and what other people think they are.  The acting all the way around is solid, Jason Bateman is very good here and he uses his persona to get us to like him then he spins it on it’s head.  The Bateman character is that type of person who hides who he is, he wears a mask and if anyone tries to peak underneath he gets very upset.

Joel Edgerton as a director and actor walks a tightrope, the character he’s playing seems off, but the film hinges on him and he can’t show his hand, is he a bad guy, a stalker, a sad sack who’s been beaten down by life, is he just a lonely nerd looking for friends so he isn’t alone.  The big thing here is we aren’t really given the whole picture of who and why he is, we hear things but never the whole thing.  The movie asks some tough questions, who are we really, is the past ever really in the past, do people really just get over things.  The Gift isn’t a true thriller, it’s more of a mystery drama, Rebecca Hall’s character at first seems like she’s just playing the wife role but she’s the straw that stirs the drink, it’s her trying to find the truth and that lends her into asking maybe the biggest question in the film, do we ever truly know anyone or do they show us what they want us to see.

What I didn’t like: The film has nice mood but it could have been tighter, it’s not over long but the tension sometimes is a bit lax.  I wish they could have shown more of the Edgerton character, I get he has to be a mystery to keep the film going but in the end we don’t learn that much about him, we know happened to him but we really never learned what he’s like now, he’s the least fleshed out. The ending is a little vague and depending how you take it, well let’s just say it could be a little creepy.  I kind of wanted a stronger ending.

Final Thoughts: I liked it, it was a thoughtful film and really takes a look at people, the thing I took away from it was do people were take responsibility for what they do or do they blames others and interestingly enough it applies to all three characters.
Rating: 7/10