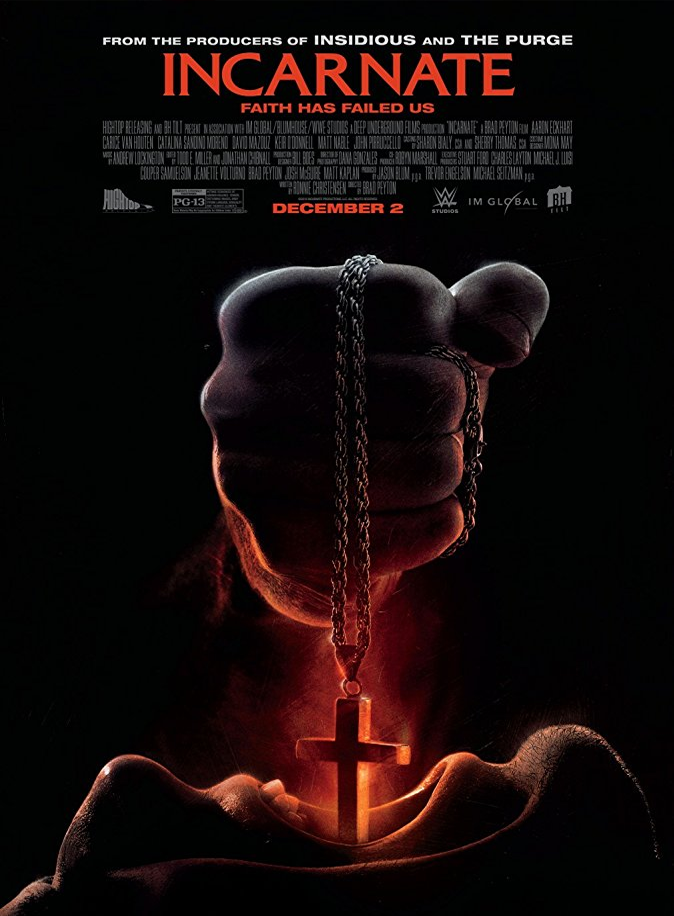 Plot: A scientist with the ability to enter the subconscious minds of the possessed must save a young boy from the grips of a demon with powers never seen before, while facing the horrors of his past.
Running Time: 1 hour 31 minutes
Rotten Tomatoes Score: Critics 15% Audience 23%

Why I watched it: It’s a horror film, but I will say I’m always nervous about possession and exorcist films cause I find them the most cliched and badly done horror sub-genre but I watched it with crossed fingers and the cast.

Random Thoughts: Here’s a big thing they list it has a 2016 film but it stayed in the can for almost three years, I can only assume they final released it because of director Brad Peyton’s success. Before going into the whole review I want to make a comment on Aaron Eckhart, he’s a good actor but he has what i call the bride’s maid career, great in support but not great as a lead. He’s done a lot of genre that sadly are pretty bad, he keeps trying.

What I like: I’ll give Incarnate a little credit they try to to do a traditional possession story by trying to down play religion and go with more of a “Dreamscape” approach. So they use wacky science, Eckhart who’s in a wheelchair goes into the mind of the person possessed and tries to get them out of the state. Not perfect but at least it’s a twist on the ordinary. Eckhart is fine here, he’s rumpled and of course has a tragic backstory. The idea isn’t bad taking two movie sub genres and throwing them together sometimes that works. All the tech stuff is fine, it’s shot pretty well and all that. The film moves pretty well at just over 90 minutes.

What I didn’t like: Just not a very involving film, I blame a few things first Brad Peyton is not a pure genre director and it shows here, he’s not great a horror, it moves well and the action is handled alright but we’re not invested in the characters and the tension isn’t their, he hasn’t built up the stakes enough. The other main problem is the script it relies on horror cliches and once we find out that the demon is really after Aaron Eckhart we know where this is going, this is a second rate movie of films like Insidious, and many others. We have characters we should care about, the boy that they’re trying to save his mother but they’re not fleshed out, we don’t know them or care for them.

Final Thoughts: This good have been a decent B-Movie a horror film version of Dreamscape I would have been fine with that but it didn’t have me invested and at times it’s boring and silly.
Rating: 4/10