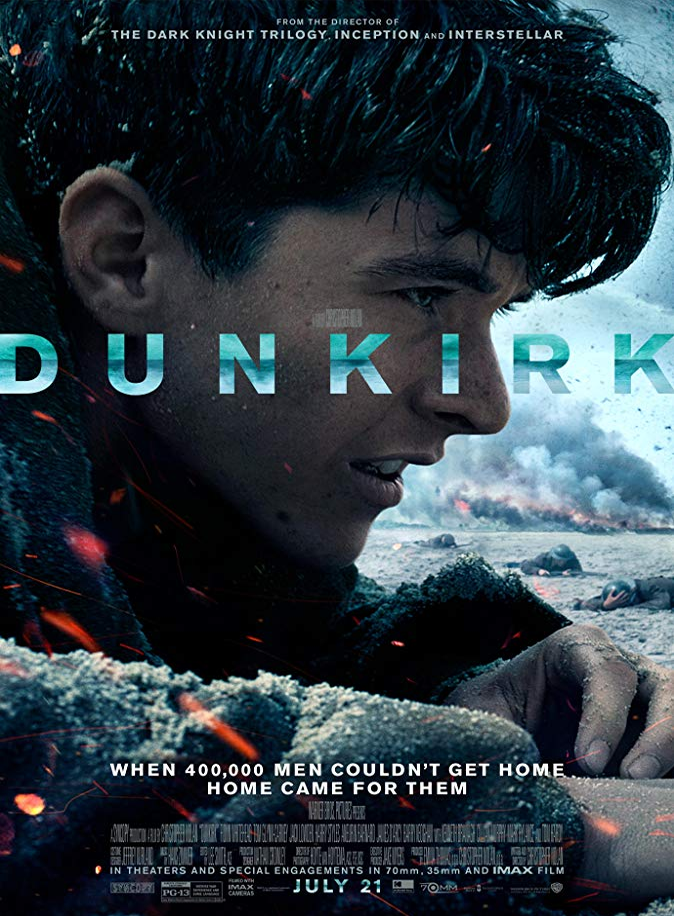 It was one of the most significant and decisive Allied moments in World War II and it was a crushing defeat. That alone should raise an eyebrow. Between the 26th May and 4th June 1940, over 300,000 soldiers of the BEF (British Expeditionary Force) were ferried across the Channel from Dunkirk to the safety of the British Isles. Completely encircled by advancing German forces, the ensuing week of terror and almost continuous bombing runs from the feared Luftwaffe left around 68,000 of that force dead and also the formidable French 1st Army (who heroically held the Germans off) obliterated.

That’s the setting Christopher Nolan chose for his latest feature film, ditching the familiar sci-fi genre in exchange for a historical drama and this film has the latter in an abundance. It’s 12A (PG13) and as such doesn’t have the intense gore that we’ve grown accustom to seeing in the war genre. Given who the director is though, it should be apparent that Dunkirk doesn’t need any of that to paint an effective picture of what happened on that stretch of beach. It’s a decidedly more visceral emotion that Nolan plumps for instead, using some cool, interesting techniques (notably the score) to create a real sense of claustrophobic tension that seems to build to nigh on unbearable levels as the plot progresses.

It’s got a tightly woven, multi-faceted plot, featuring three distinct perspectives, complete with their own group of characters that just seems to work beautifully. On the ground, the main focus is on Tommy (Fion Whitehead); a young British private that opens the film with a tense escape from an ambush, darting over the French perimeter to the quasi-safety of the beach. Incidentally, that first shot of the beach is breathtaking. It transports you back nigh on 70 years. From the sea perspective the film follows mariner Dawson (Mark Rylance), his son Peter (Tom Glynn-Carney) and later Cillian Murphy’s rescued character ‘Shivering Soldier’. And finally in the air we’ve got Farrier (Tom Hardy) and Collins (Jack Lowden); two Spitfire, RAF pilots doing their best whilst vastly outgunned.

What’s remarkable about these differing perspectives is the manner in which Nolan manages to work them. Tommy’s portion plays out over a week, Dawson’s a day and the RAF lads’ an hour. They all interject at different points, each view being told concurrently on screen whilst in the actual story they’re obviously occurring at different times. And without giving too much away, it comes together very intelligently, culminating in the final day on the 4th June.

It’s quite a short affair for a Nolan film, I’ve since read that it’s officially his shortest feature to date. The first to drop under the two hour mark in actual fact. Just like the story elements though, I think he gets the duration pretty much spot on. I couldn’t envisage Dunkirk being any longer. There’s so much dread, death, suffering and hopelessness throughout that it really needed to be contained to that shorter running time. And that’s actually one of the biggest positives I took from this film; the fact there wasn’t an attempt made to lighten the tone. It just told the story, which isn’t for the faint hearted. There’s multiple ships sunk with U-boats, or German bombers, a horrendous oil slick fire, countless air raids and absolutely nothing the Allied forces can do about it. There’s no heroes to save the day (apart from the obvious fleet of civilian vessels).

Which brings me into my next point nicely. There’s no real character development in Dunkirk and this is entirely deliberate. It’s not a story of individuals. It’s about human spirit in overwhelming adversity and the realisation that sometimes surviving to fight another day is every bit as important as winning a strategic victory. That’s not to say there isn’t any great individual performances because there is. Fion Whitehead stole the show for me whilst barely uttering a word and yet managed to convey a multitude of different emotions in his muteness. Mark Rylance was fanatastic and I particularly enjoyed Hardy, Murphy and Lowden’s performances. Kenneth Branagh was tremendous and even Harry Styles, who I wasn’t expecting much from, did surprisingly well as private Alex. He also got more screen time than I anticipated.

I can’t review this film and not discuss the visuals. Hoyte van Hoytema teamed up again with Nolan after the two worked together on Interstellar (another stunning cinematic experience). This film is a visual masterpiece, everything about it is utterly beautiful. There’s an attention to detail that just blows my mind. The Spitfires are there in all their glory, the actors are actually inside them and the aerial dogfights were a real high point, taking place over the choppy, blueish grey sea below. As I mentioned previously, the beach scenes were harrowingly beautiful. There was two particular shots that stand out in my mind however. Firstly, the shot of Dawson’s small boat passing the British destroyer, the visual juxtaposition of the two perfectly illustrated the perilous nature of their predicament whilst capturing the spirit of the Dunkirk evacuation in one shot. Secondly, was the lonely wide shot of Farrier’s Spitfire gliding low along the beach.

Likewise, the score deserves its own mention. I’m almost running out of adjectives to describe the genius of Hans Zimmer. The collaborative efforts of both him and Nolan together make magic happen. This score is just eerie at points in the way it ratchets up the tension and really feeds into that claustrophobic feeling. It builds to a never ending crescendo of seemingly endlessly higher notes and there appears to be the sound of an actual clock ticking away in the background (I’m not sure whether I imagined that or not?), all of which adds to the growing sense of haste to get home the British soldiers have and it just fits the film perfectly.

I’ve rambled on a fair bit here, I know, but Dunkirk was my first real introduction to World War II (thanks to my old Grandad). A subject that I’m now well and truly obsessed with, so do forgive my rambling if you can. Needless to say, this is a fantastic film, it really is. I would have absolutely no hesitation in recommending it. It’s a historical event which has often been overlooked by many non-war buffs and I’m delighted it’s been given a modern release. Operation Dynamo wasn’t the happiest or most successful time for Allied forces, but it perfectly encapsulated the British spirit that eventually helped turn the tides. Nolan captured that and more here.