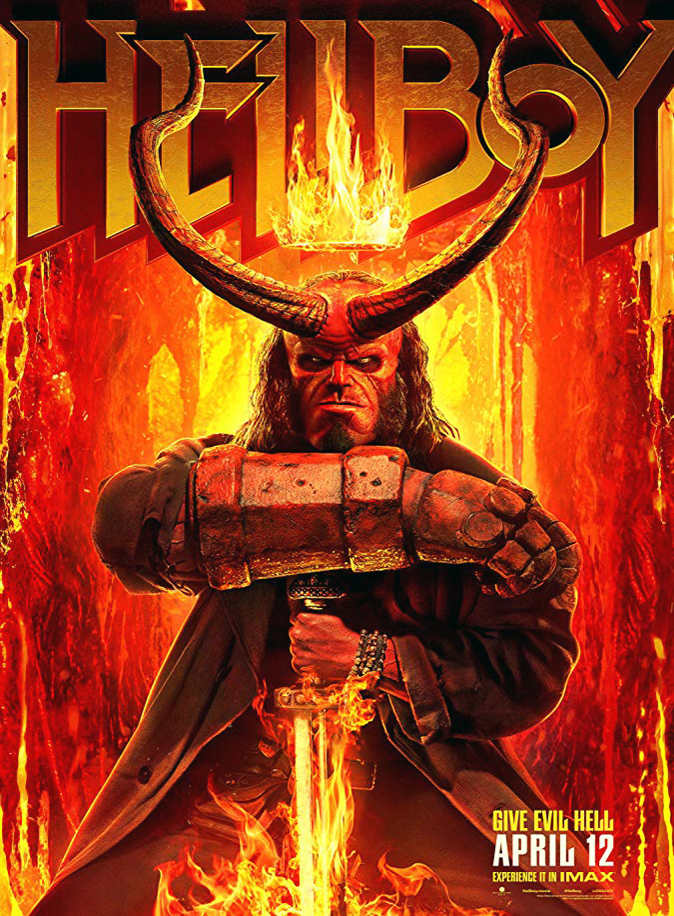 I should be up-front and state I’ve never seen either of Guillermo del Toro’s Hellboy movies, for no other reason than I simply never got around to it. I don’t read comics, either, so I couldn’t tell you a damn thing about the character, his origins or even the basic premise.

I only mention this because the shadows of Guillermo del Toro and Ron Perlman loom large over the newly-rebooted Hellboy, especially since the corpses of the originals aren’t really that cold yet. But as someone with no basis for comparison, I don’t carry any preconceived expectations or fanboy baggage. However, I’ve enjoyed some of director Neil Marshall’s previous films – The Descent, in particular. He’s no del Toro, but at the very least, it would probably be watchable. All that being said, while Hellboy won’t ever be mistaken for a masterpiece, I can’t say I was disappointed.

An unrecognisable David Harbour plays the titular character, a gruff, trash-talking manbeast who was born in Hell, but rescued and raised to be a demon-slayer by his adoptive father, Trevor Bruttenhorn (Ian McShane). Refreshingly, this isn’t yet-another origin story. Not directly, anyway. Other than a few flashbacks and an amusingly-outlandish revelation of Hellboy’s aristocratic lineage, the story focuses on the present, where the world is threatened by the Blood Queen (Milla Jovovich), a sorceress once defeated and dismembered by King Arthur. Hellboy himself figures into her agenda, a seduction which has him questioning his loyalties (tempted by the likes of Jovovich, who can blame him?).

He isn’t working alone, though, getting help from plucky young medium Alice (Sasha Lane) and Ben Daimio (Daniel Dae Kim), who turns into a jaguar when he’s pissed off (though he tries like hell not to). I couldn’t tell you if they’re also lifted from the comic, but both are interesting, the latter being particularly amusing when he finally gives in to his animal side. Speaking of amusing, as someone unfamiliar with Hellboy lore, the overall tone of this film is quite similar to Deadpool. Though not as consistently funny or uproariously vulgar, it has its moments, unquestionably earning its R-rating through perpetual profanity and buckets of blood & gore. Visually, Hellboy is typical of most CGI-heavy action films, save for one wonderful sequence where our hero battles three carnivorous giants, which looks almost like Terry Gilliam took over the director’s chair while Marshall was out grabbing a smoke.

As Hellboy himself, Harbour gives a serviceable performance, but buried under that much make-up, just about anybody of similar size and able to adequately deliver their lines could have played the character. I suspect the general fan consensus will be that he’s no Ron Perlman, similar to my view that Kane Hodder made the best Jason Voorhees.

At just over two-hours, the film could have used some trimming, particularly during the middle act, which tends to meander a bit. Still, I found this version of Hellboy enjoyable enough on its own terms. That may be faint praise for die-hard fans of the comic series or del Toro’s films, some who probably had their minds made-up before watching a single frame of this one. But for those who don’t know Hellboy from Hellraiser, it’s an agreeably gory way to spend an evening.