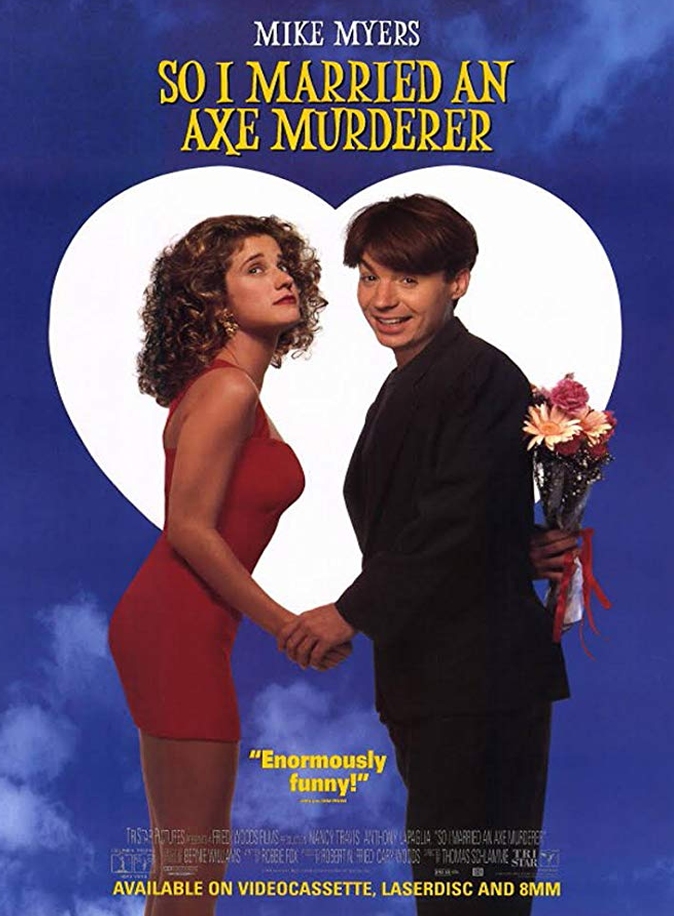 So I Married an Axe Murderer came out the year I turned 17. I had only just been introduced to the world of Mike Myers the year before when the hit comedy film Wayne’s World was released. In the UK we didn’t have access to Saturday Night Live, There was no Internet and Satellite TV was restricted in the area I lived in (we didn’t get Satellite TV until 1996) So how did I stumble across a “lesser” known Mike Myers film? the answer is through my brother Kevan and  fellow Movie Burner who saw this movie on it’s initial release with our Grandfather (who loved it by all accounts)

So I Married an Axe Murderer plot is centred around Myers character Charlie MacKenzie who appears to have commitment issues with previous girlfriends (he was convinced one was a kleptomaniac who had stolen his Cat??? The other he described as of smelling of Soup….Beef Vegetable Soup to be precise) his friend in the movie and a police officer is Tony (played by Anthony LaPaglia) who highlights this at the very opening scene to give the audience an idea on the issues Charlie has.

Before visiting his parents (who are Scottish) Charlie pops into the local butcher shop to purchase some Haggis for his folks as a present and it is here he meets Harriet (Nancy Travis) both of them hit it off really well and begin to like each other. The introduction to Charlie’s character already gives the audience an idea that it will only be a matter of time before Charlie begins to look for flaws and an escape route in this relationship he has with Harriet, even in these early stages.

Brenda Fricker plays Charlie’s mum and adopts a very convincing Scottish Accent fans the flames of the Charlie’s commitment issues when she shows him a rather far fetched article in the “World Weekly News” in what appears to be a women traveling across America marrying men who end up murdered shortly after they Marry this woman. As Charlie begins to pick up little pieces of information about Harriet’s past, there are little coincidences that seem to have the same pattern between Harriet’s life and the Woman in the article sending Charlie into a paranoid downward spiral.

That is basically the list of So I Married an Axe Murderer. The talking points of this movie isn’t it’s storyline which is a little silly if I’m being honest. It’s not the acting either as within the cast they do a good job, nothing more and nothing less and there are some great cameos in the movie too that I will get to. The talking point of  this movie is it’s humour. You have to remember that this was Myers second movie and essentially the one that came soon after his big hit that was from a sketch on SNL.

Well So I Married an Axe Murderer is kinda a series of sketches with some SNL cameos in there for good measure. The highlight for me is Charlie’s father Stuart (also played by Mike Myers) Being Scottish myself I can relate and most Scottish people can to having a relation who is similar to Stuart who has some far out opinions and very grumpy and straight to the point. You can also see where Myers drew inspiration from this character in future films where he uses the accent again and again.

The Character of Charlie is a little undeveloped if I was to have any issues with the film. Yes we know his fears and paranoia. It’s never explained exactly what Charlie actually does for a living (not that that is important) but he appears to perform at open mic nights performing poems, driving around in a convertible and spending most of his time hanging around Harriet’s butcher shop or visits to Alcatraz with his good friend Tony. Charlie is a likeable character though and just appears to have a lot of bad luck in previous relationships.

Mike Myers is almost the opposite of Wayne Campbell in this movie and isn’t relying on in your face humour and wit. Instead the character of Charlie is underplayed at times and Myers allows his supporting cast to build the humour around his central character.

I had only seen Nancy Travis once previously to watching this movie back in 1993 and that was when she appeared in Three Men in a Baby. Travis does well as Harriet and like Charlie isn’t there for comic relief, but more for the storyline. Both Myers and Travis have good chemistry between each other in almost every scene and probably the funniest scene both of them are in is unintentionally funny to most people is when Charlie receives the phone call from Tony that Harriet is in fact Mrs X from the newspaper article. Travis and Myers play this scene out perfectly and his desperation to escape her and her desperation to hold on to him is really funny, even if I think it wasn’t on purpose by the storyteller.

As I previously mentioned it would be remiss of me not to mention the cameos throughout the movie. Phil Hartman’s Ranger John ‘Vicky’ Johnson is probably the most talked about one and owns the scene in Alcatraz. It’s hard to believe even to this day that Hartman is no longer around and just seeing this scene saddens me to think of other roles he would have taken and how his career would have panned out.

Steven Wright as the Pilot is another one that I found funny at the time as basically this films version of Ottoman the bus driver from The Simpsons. He is a total stoner and the kind of person you wouldn’t want to fly a plane you were traveling in…..at night……in thunder storms.

Probably the second most favourite cameo after Hartman is from Charles Grodin as the driver of the car that is commandeered by Tony desperately trying to reach Charie as quickly as possible in a life of death situation. Grodin nails the character as a grumpy almost psychotic man who appears to be just containing his rage and no more with sarcastic line after line. For some reason I found this hilarious at the time.

Seinfeld’s Michael Richards is also in there as a Newspaper reporter that although is in a little funny scene as “Mr Insensitive” looks a little shoehorned in and isn’t essentially a required scene to the storyline.

There isn’t much music in So I Married an Axe Murderer apart from repeated listenings of The Las “There She Goes” also performed by the Boo Radleys. I loved this song when it came out and it is still one of my favourites to this day. Two Princes by The Spin Doctors, remember that? I also loved that when it came out and there is a great speed boat to alcatraz sequence with this song playing that is also memorable.

Mike Myers is more commercially successful in movies such as Wayne’s World, Austin Powers and Shrek, but for the reason I have mentioned I will always love So, I Married an Axe Murderer for what it is. The humour is just right and keeps the movie from being pigeon holed as a Rom-Com. With it’s dark elements throughout the movie and it’s rather offbeat characters and jokes it is still an enjoyable film 24 years later. If you haven’t seen this film before I highly recommend it as one of Mike Myers’s under the radar comedies.