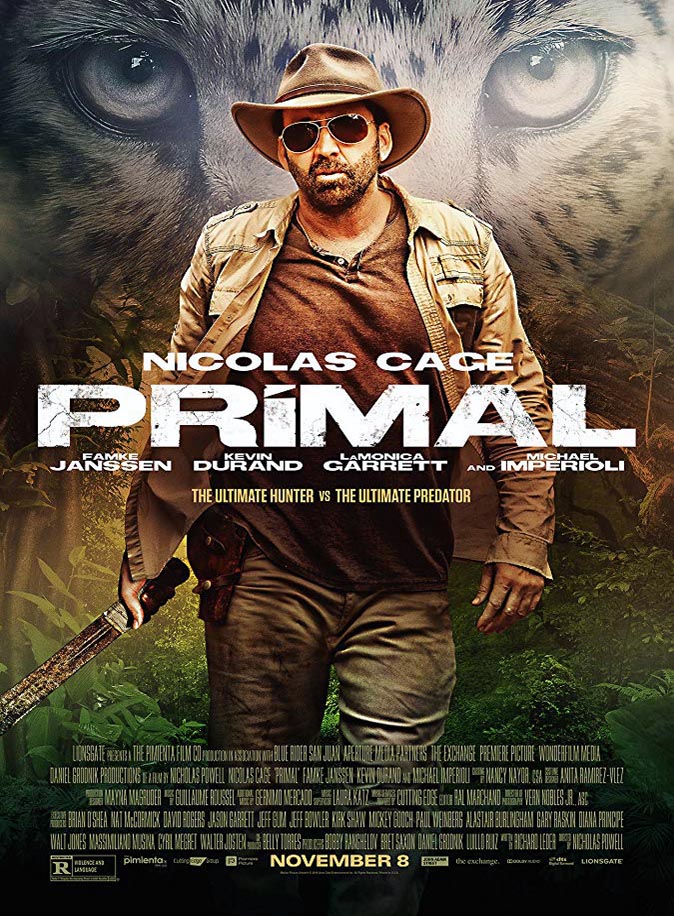 National treasure Nicholas Cage squares-off against a deadly jungle cat and a vicious assassin on-board a cargo ship. Man, I don’t see how anyone could pass that up. It’s a concept as wonderfully ridiculous as Samuel L. Jackson battling snakes on a plane. Primal doesn’t milk its premise to the campy heights of that kitschy classic, but it’s a lot more fun than the average Nick Cage Movie of the Week.

Cage plays Frank Walsh, a grizzled, grumpy game hunter who traps wild animals to sell to zoos. His latest haul includes birds, angry monkeys, poisonous snakes and – his biggest prize – a rare white jaguar. Sharing the boat ride home, however, is rogue assassin Richard Loffler (Kevin Durand), who’s been captured by U.S. forces and being returned in chains to stand trial for his crimes. Naturally, he manages to escape and frees all the animals. So now it’s man vs. man and man vs. nature, with Loffler and the cat picking off the supporting cast one by one.

Primal has less actual animal action than I hoped. Not that the conflict involving Loffler isn’t enjoyable. Durand does a decent job playing your standard over-confident bad guy, but watching nature get even is a lot more entertaining, especially in an unusual setting. Still, the beasties manage to get-in their licks here and there. Those scenes are the goofiest, therefore the liveliest, even if the CGI-rendered jaguar is laughably unconvincing.

Cage attacks his role with his inimitable brand of gusto, tongue planted firmly in-cheek, which is always enjoyable. Less vital is Famke Janssen as Ellen Taylor. She plays a Navy doctor tasked with monitoring Loffler’s health, but mostly exists to bicker with Cage and place herself in peril. The remaining cast – including Michael Imperioli – are essentially cannon fodder (or cat food).

Well made on a relatively limited budget, Primal won’t win any Oscars, but it’s hardly Razzie-worthy, either. Fast-paced and enjoyably silly, this features Nick Cage in prime any-role-to-pay-off-my-debts mode. And that isn’t always a bad thing, especially once he breaks-out his trusty blowgun.