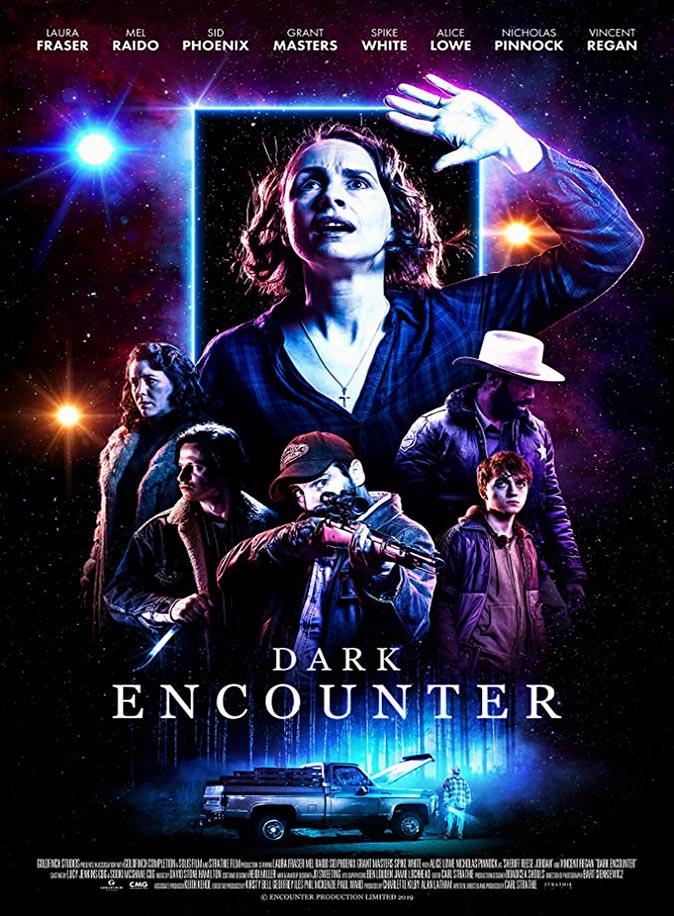 I saw “G-Loc” a while ago. And my first thought now was: “Why not try another SF?“. Not only because it’s one of my favorite genres. But because “G-Loc” was horrible and a disappointment in every way. And I wanted to forget this ordeal as soon as possible by watching an SF of better quality. And luckily “Dark Encounter” was of a completely different quality than the latter. Even though that wasn’t really difficult to achieve. But in retrospect, I did wonder whether it was indeed an SF in the strict sense of the word.

The opening scene shows mother and father Anderson coming home from a night out after which they discover that their daughter Maisie has mysteriously disappeared. However, there’s no trace or indication of a violent kidnapping. She simply vanished into thin air. In the next scene, we witness a family gathering. A family dinner where it’s abundantly clear that the pain of losing their child is still there, resulting in snappy conversations in a tense atmosphere. Until suddenly strange light phenomena are seen by Ray (Mel Raido) and he and the other present men suggest investigating the seeings. When they arrive in the forest and witness more spheres flying around and one of them disappears without a trace, they realize there’s more to it than some inexplicable weather phenomenon or local rascals playing with fireworks.

I have to admit that Carl Strathie knows how to mix different genres in an ingenious way. In general, you think that for the umpteenth time, alien green creatures are randomly abducting people to use them as guinea pigs for their experiments. Or maybe Martians who just dropped by to get acquainted. However, don’t expect impressive images of colossal intergalactic spacecraft. It’s limited to bright shining lights during a foggy night. Even though there are similarities with for example “Close Encounters of the Third Kind”, you won’t be awed by an immense spaceship with lighting like the dance floor in “Saturday Night Fever”. Next, you get the feeling that you are watching a scary horror where household objects defy the laws of gravity and where lights start to flicker. And as a basis, you have a family drama about missing a loved one and the accompanying grieving process.

And if these aren’t enough film genres, there’s the very surprising denouement, after which the whole is suddenly approached from a completely different perspective. The sci-fi aspect fades into the background and a crime mystery demands attention. The denouement is overwhelming and most will react in a similar way as I did. “Ah, that’s what’s going on” as I thought at that moment. All I wondered is the origin of the entities that provide the clarification. Aliens? Or spiritual manifestations? Not that this matters. The end result is what counts. And thanks to this highly original twist, this film effortlessly rises above average.

“Dark Encounter” is a low-budget film with an original approach. Despite the fact they diligently borrowed from other well-known films, “Dark Encounter” pleasantly surprised me. And not just because of the originality of the story. But also because of the acting by the almost unknown cast (especially Laura Fraser). Plus the excellent soundtrack and sound effects. And the nostalgic feeling it gave me. It reminded me several times of similar films from the 80s. And the overall mood they managed to create. There’s something else that surprised me after reading about it. It seems as if it all takes place in the U.S. during that period. And yet this movie was entirely filmed in the UK with English actors. Amazing. In short, this SF is highly recommended.