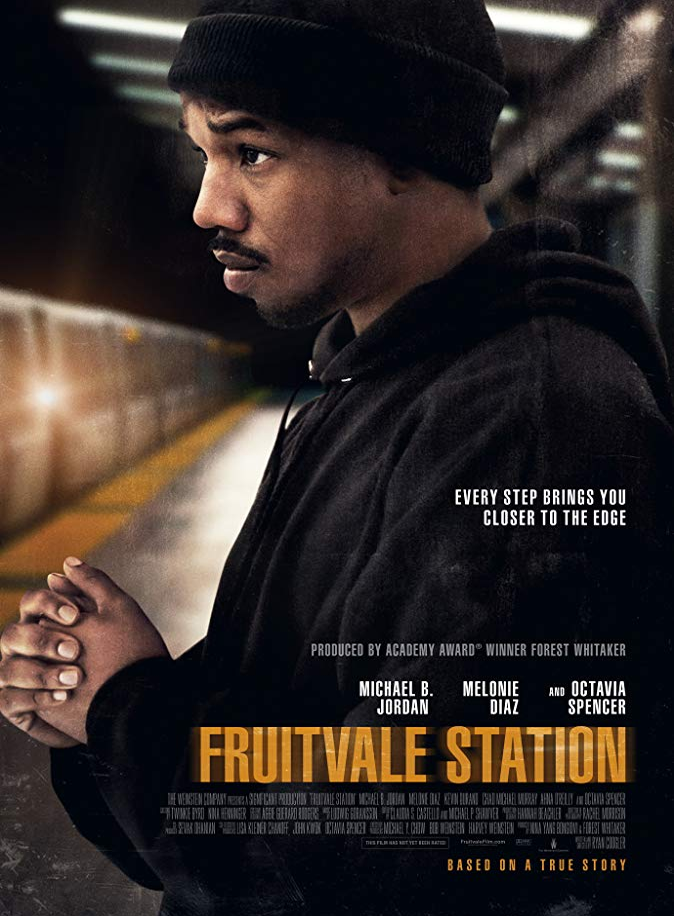 A powerful and emotionally wrenching story that four years on from its release is still sadly revelant in today’s climate of ongoing, racially charged hatred. Much of the emotional content of this film stems from it being based on the real life murder of Oscar Grant. A young, 22 year old, African-American man who was shot in the back by police officer Johannes Mehserle after New Years celebrations at the titular Oakland rail station.

Mehserle, claimed to be reaching for his taser when he inexplicably pulled his gun instead and fired. What came next was the usual ghoulish media attention and riots from rightly outraged people. When word of the killing reached the attention of then film graduate Ryan Coogler, he was immediately inspired to tell the story of Oscar’s final 24 hours. He developed the script and with the financial backing from Forest Whitaker and his production company, soon set about making this a reality. And it’s in that inspiration where this film finds its real soul. The media almost always fails to convey the human story in these situations. Coogler rights that particular wrong here, shirks going down the usual route of overly politicising the story and instead delves into the real tragedy. I.e. Oscar and his loved ones. It focuses on who he was as a person and manages to breath a new, more intimate, personal perspective into both the atrocity.

There was accusatory criticism levelled at Fruitvale after it’s release for over romanticising the life of Oscar, portrayed by the immensely talented Michael B. Jordan. If it is guilty of this then it’s a forgivable use of artistic licence, especially in the early part of the film, when the viewer is still forming an emotional connection to the character. It does have a few unlikely soppy scenes in there. The chief of which being his epiphany like moment when he throws a zipper full of marijuana into the sea to denote a new found sense of maturity. You’ve also got the fairly ridiculous, foreshadowing meeting with the dog at the gas station, which is then the victim of an unlikely hit and run, ultimately dying in his hands and even the semi-flirtatious brush with a young lady at the supermarket in desperate need of some cooking advice, which Oscar selflessly provides via his old grandma.

Ok, maybe I’m being harsh with the last one, I mean that may well have happened, he did work at a supermarket, but the marijuana incident is an embellished truth at best and the dog scene is the pure figment of Coogler’s imagination for sure.

In Coogler’s defence though, he does counterbalance these couple of holier than thou traits with the more human like faults (for want of a better word) you’d expect in a young man of that age, growing up within that difficult environment. For instance, it’s established early on that Oscar has been guilty of cheating on his wife, potentially endangering his marriage and relationship with his four year old daughter. He’s been guilty of dealing drugs (admittedly to keep a roof over his family’s head), and at the point we join him, has just lost his job for repeatedly poor timekeeping. He’s also seen serving time in prison via a nicely worked flashback with his mother Wanda, played by the wonderful Octavia Spencer. A flashback, which incidentally, continues the ongoing psyche balancing act by showcasing his potential for hot headedness and quickness to anger.

I could understand this criticism more if the man is put forward as a messiah like figure, but he isn’t. If anything, Fruitvale paints an impressively complicated figure of Oscar. It does project the kind, thoughtful and family man aspects, but the aforementioned deliberate counterbalancing of his character means the criticism is ultimately misplaced and more than a little harsh. It really stems back to what I mentioned earlier. This film is a brilliant portrait of Oscar, taking a good, reflective look at his side of the story, and by all accounts, the facts are pretty much bang on. He was indeed married with a young daughter and had recently lost his job, and even the darker sides of his life, like the time spent in prison and drug dealing are accurately depicted.

In the end, Ryan Coogler did exactly what he aspired to do in telling Oscar’s story and putting his final day on film. In doing so, he also delivered a pretty damning indictment on the modern issues that seem to be afflicting many young African-Americans. Most notably, the incarceration many disenfranchised, young men face for repeat offending, a problem only exacerbated by the complete lack of opportunity given to them, and last but by no means least, the systematic racism still ingrained in many police forces to this day. A problem that causes killings like Oscar’s to be repeated again and again on an almost yearly basis. If films like this, by portraying the human story in the frenzied media reporting of such incidents, can change attitudes in even a small proportion of people then that can’t be a bad thing.

I thoroughly enjoyed this film from pretty much the start to finish. It possessed a moving, engrossing and excellent story. This was definitely enhanced by the mere presence of Michael B. Jordan and Octavia Spencer. Both delivered exceptional performances alongside Melonie Diaz, who was also excellent as Sophina. It’s a surprisingly short film, but it’s brilliant and definitely worth a watch.