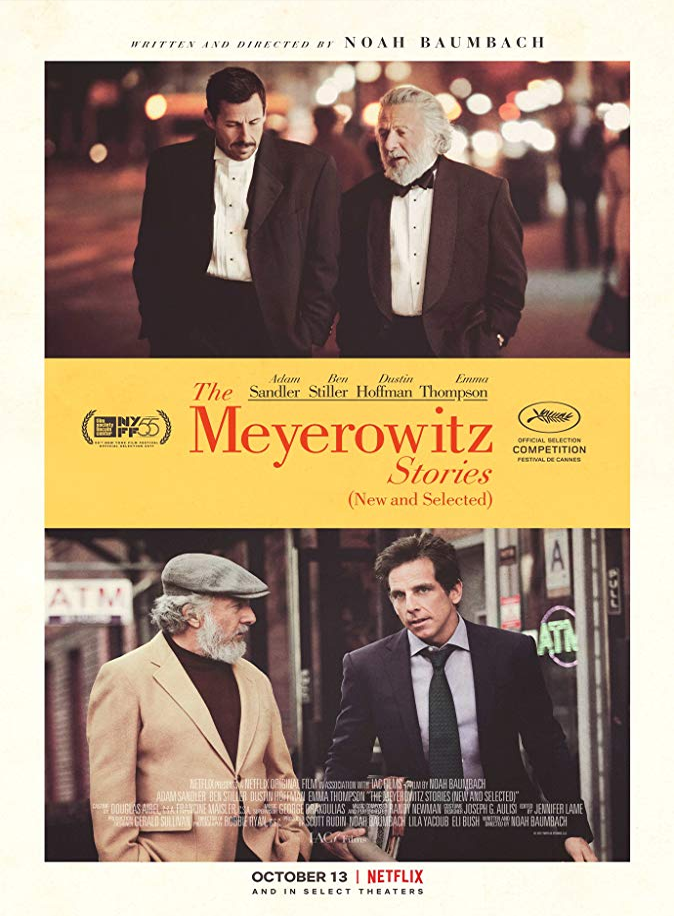 “The Meyerowitz Stories” is the story of an estranged family who gather together in New York for an event celebrating the artistic work of their father.

Going into “The Meyerowitz Stories” I didn’t really know what to expect as I felt the first half hour was introducing all the different family members and it played out like a kinda comedy drama without digging too deep into any character development. Most of these scenes are filled with heavy dialogue as the cameras pan around the family, although the opening scene with Danny (Adam Sandler) and his daughter Eliza (Grace Van Patten) immediately gives the audience an indication on the tone of the movie.

Writer / Director Noah Baumbach’s structure to this movie is in chapters and the development and depth of the characters is slowly and subtly drip fed to the viewers and by the end of this story you can identify and relate to them. Baumbach’s pacing throughout is consistent and each character’s story is respected and well rounded.

Dustin Hoffman as the artist father Harold is a joy to watch and at the same time frustrating. His annoyance and perhaps jealousy of his old friend and fellow “more successful” artist LJ Shapiro (Judd Hirsch) is rather amusing and although comes across a little bitter is actually harmless. His screen time is mostly with his son from his first marriage Danny and although there are signs of a strained relationship Hoffman and Sandler come off well in these scenes and are a believable Father and Son.

Adam Sandler seems to be going through a phase in his career for every underwhelming movie he appears in his next is pretty decent. His run of movies on a Netflix at the moment have been pretty inconsistent of late but nevertheless he seems suited as the role of Danny the son who is a talented musician but never feels the urge or ambition to exercise his talents. Ironically of late these roles seem to suit him and the audience don’t appear to be giving him a rough ride. It’s his more expected outlandish comedic roles that appear to suffer.

One of his successes is his relationship with his daughter Eliza who is played by Grace Van Patten. Their opening scene allows the audience to understand the relationship between Father and Daughter and to be fair although has limited screen time, Van Patten’s character is pretty memorable as a talented student film maker and her movies, although disturbingly humorous.

Elizabeth Marvel is Danny’s rather odd but brilliant sister Jean. I don’t think there was any scene Marvel was in that wasn’t subdued or run of the mill. Her lines where impactful and memorable and as the story unfolds, quite sad in a way that I don’t want to spoil, but I will say this. There is a reason why she is who she is.

Emma Thompson as Harold’s third wife Maureen is a rather dysfunctional and odd character who appears to be stuck in a hippy era that portrays the character as a step mother who suffers low confidence and scatty at times and for someone as talented as Thompson appeared a waste that her time on screen is limited.

Ben Stiller as Matthew, the half brother to Jean and Danny and I must say his introduction to the movie came at the right time. Matthew is a financial adviser and one of his clients is Randy played by Adam Driver. Matthew is in the middle of an on-site inspection with Randy when he receives a call fro his Dad Harold who is meeting him for lunch. Unfortunately Adam Driver’s role is a mere cameo and only sets up the lunch scene with Stiller and Hoffman. Harold’s irritation of the fellow next to him is hilarious and show little signs that Father and Son are very different people.

I must admit as the movie moved on into the hour mark I was beginning to doubt Stiller and Sandler would share any screen time and it isn’t until their father is admitted to hospital in a very serious state. The relationship between both Danny and Matthew is more pleasant than what I was expecting as all indications at the beginning of the movie pointed in the direction that Matthew was the favourite son and there would be tension between both half brothers. Thankfully the character of Jean was just as prominent in this part of the movie and still had an important role and reveal.

“The Meyerowitz Stories” for me is a traditional dysfunctional family drama that appears to work. The movie’s conclusion gives you enough to know that all of these peoples lives go on regardless what happens at the end of the movie and Director Noah Baumbach although probably doesn’t want to explain every little detail on what happens next to them leaves enough for the audience to be satisfied. Baumbach’s story could be borderline “a hint of pretentiousness” but thankfully fell on the right side of that line. Character wise we were introduced to them as strangers just like in real life and by the end of the movie you understood them. The movie has the right blend of comedy and drama and this is why I would recommend giving this movie a go.