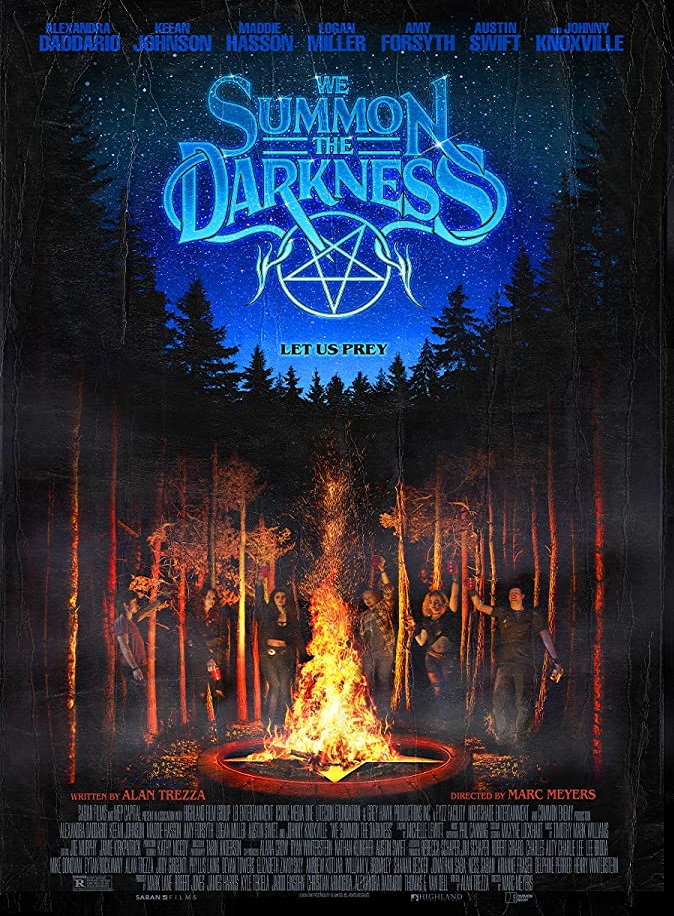 We Summon the Darkness is a good example of why you don’t turn off the game at halftime, even if your team is getting its ass kicked. Sometimes you just gotta be patient.

Alexis, Valerie, and Beverly are hot metal chicks who meet three guys at a concert. Afterward, they decide to continue the party at Alexis’ dad’s house, who’s apparently gone for the weekend. The film drops hints of what the plot might develop into – there’s been a series of murders that appear to be the work of devil worshippers – but for the most part, the entire first act consists of these guys drinking and name-dropping ‘80s metal bands.

The first thirty minutes are almost embarrassingly awful. The story takes place in 1988, presumably for the sole purpose of superficially establishing its metal cred (or Wikipedia skills). The dialogue is forced, banal and boring. More glaringly, none of these characters feel even remotely authentic. The girls, in particular, come across as caricatures from Headbanger’s Ball. Though I never quit any movie I’m tasked to review, I was certainly tempted a few times here.

Some of you might recall Super Bowl LI when the Atlanta Falcons were annihilating the New England Patriots. By halftime, the game was all but over. I’m sure some frustrated fans in Boston probably shut off the game to put themselves out of their misery. However, they missed the greatest comeback in Super Bowl history.

Sometimes patience is a virtue. We Summon the Darkness takes a sudden, wonderfully clever narrative turnaround and never looks back. The plot does-indeed involve the serial murders mentioned earlier, but not how you’d expect. To explain in any real detail would spoil the party, but I didn’t see it coming. Yet at the same time, it isn’t quite out of the blue. With hindsight, the setting, superficial dialogue, and manufactured metal chicks make total sense…it’s actually a triumph of subtle foreshadowing. And of course, it has to take place in the ‘80s. That decade was the pinnacle of “Satanic Panic,’ when bible-thumping Chicken Littles were all over the media, warning the world of the dangers of engaging in anything fun. And as it happens, those same Chicken Littles figure into the story, as well.

We Summon the Darkness is more of a brutal black comedy than pure horror. While there’s certainly enough tension and blood to keep the horror crowd happy, it’s just as often quite funny, albeit morbidly so. And although some of the cast look a little too old to pass for young metalheads, the performances are pretty good. Part-time scream queen Alexandria Daddario appears to be having an especially good time, not only playing against type but engaging in some prime scenery-chewing.

So what was initially shaping up to be an interminable eye-roller ends up being one of the more amusing new films I’ve reviewed lately, similar in execution and tone to You’re Next. It takes some patience to endure the first half, but football has four quarters for a reason: It’s never too late for a comeback.