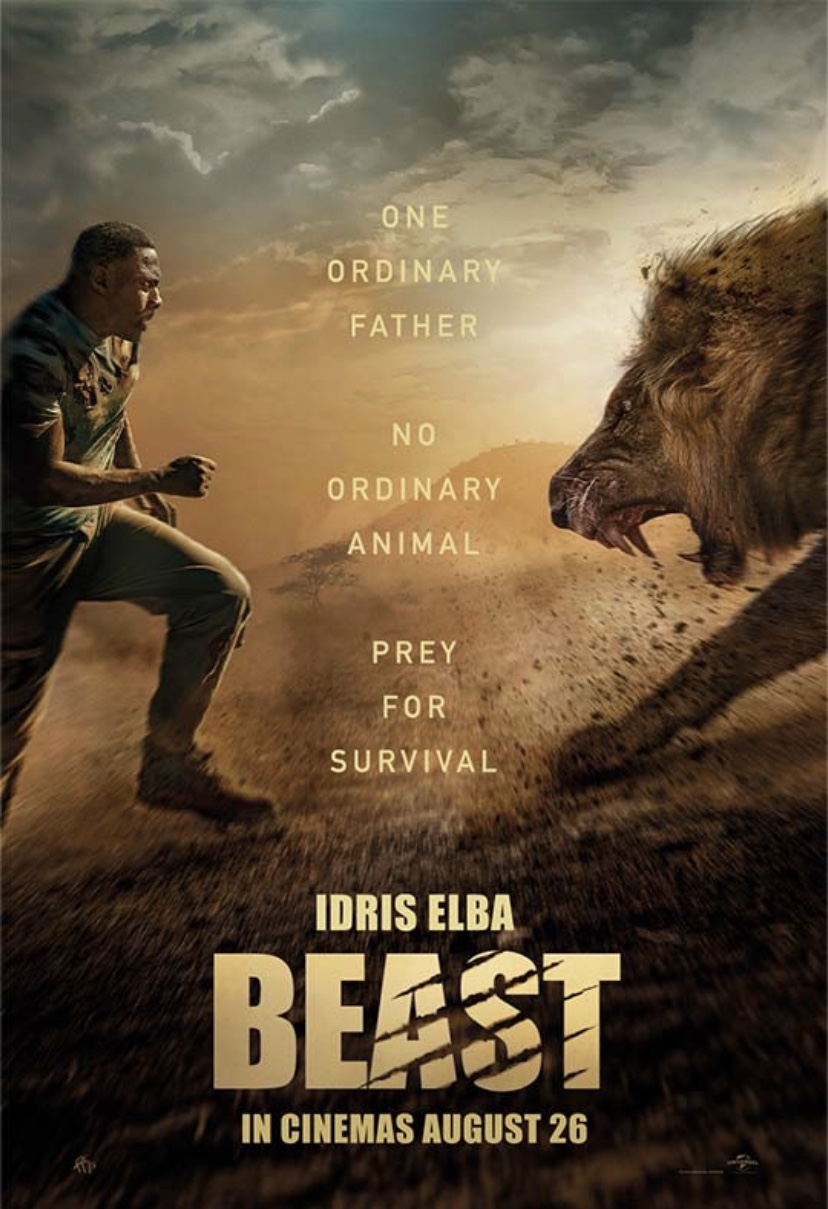 Good news, cat lovers (and who isn’t?)…the titular critter in Beast is not necessarily an antagonist we’re expected to root against. While he’s definitely one bad kitty, he’s got a damn good reason for his rampage. After poachers wipe out his entire pride, he wages all-out war on humans, sort-of making him a Charles Bronson of the Pride Lands.

Nate Samuels (Idris Elba) and his two daughters, Mare & Norah (Iyanna Halley & Leah Sava Jeffries) are simply victims of bad timing, visiting old friend and conservationist Martin (Sharlto Copley) just as this lion starts indiscriminately killing people. One dad is trying to protect his family, the other is avenging his family. Not a bad premise for a movie, which Beast executes quite admirably.

The narrative does a decent job establishing all four major characters before getting to the animal action. Nate is a widowed doctor who’s been somewhat estranged from both daughters – Mare, in particular – ever since their mother died. He ain’t a perfect dad, but at least he’s trying, which doesn’t really impress Mare, who ain’t the most likable kid on Earth. In fact, when she later chooses a particularly inopportune moment – trapped in a wrecked Jeep while the lion is stalking – to berate him about keeping promises, a small part of me briefly hoped she’d soon be cat chow.

That Jeep is where much of the middle act takes place. When Martin is severely injured, it’s up to Nate to save everybody, a task made nearly impossible because they’re in the middle of nowhere and unable to contact anyone on the radio. Exacerbating his problems are his own kids, who repeatedly ignore his orders to stay in the damn car. Every ten minutes, one or the other is wandering off to put themselves in harm’s way.

Still, Beast is mostly a gripping, suspenseful ride. Elba carries much of the film on his shoulders with an earnest physical performance. At the same time, we’re sort-of rooting for the lion, too, which makes the scene where he finally slaughters those poachers pretty damn satisfying. It goes without saying that movies like this must culminate in a man vs. beast showdown (it’s the law, look it up). But since we’re expected to plant a flag in both camps and it’s obvious even the mighty Idris doesn’t stand a realistic chance against a rage-fueled lion, the film draws inspiration from Jurassic Park for a climax that should make everybody happy.

The lion himself isn’t always convincing, but not bad for a CGI critter. Elsewhere, Beast benefits from a brisk pace, well-executed action and strong characters…even if a couple of ‘em are sometimes annoyingly stupid (hey, they’re teenagers). While it’s certainly no Jaws, this film is recommended for anyone who gets their kicks seeing nature strike back.